When I was given this edition of The Final Call today, I looked at the front cover page of it. I took my camera and took this photograph. It’s part of my article, which you can see. 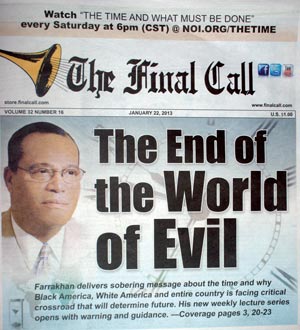 Then, I went back to finish my article, which was all but finished, at that time.

In my last article, I wrote:

“I did not know that Sister Kelmer Muhammad did not know of the 4th edition of the book Is It Possible That The Honorable Elijah Muhammad Is Still Physically Alive???, when my wife and I met with her.”

“This fourth edition was done, right after the completion of Closing The Gap and was put before the public in February 2007.”

“Both books came out and a week later I was hospitalized.”

Sister Kelmer Muhammad shared the following words with me during our meeting:

“As I read Closing the Gap for the second time, I find myself thanking Allah for allowing me to see the inner-being of two great teachers: the Honorable Elijah Muhammad and Minister Farrakhan.”

“I would like to thank Brother Jabril Muhammad and all those who helped in the birth of this soft cover book. The softness of this book allowed me to understand and see the feminine side of my teacher and my Minister.

“This feminine book helped me to understand why The Minister was chosen to sit in the seat in the absence of our Leader, Teacher and Guide, the most Honorable Elijah Muhammad.”

One of the meanings of the word “process” is a series of actions or steps taken in order to achieve a particular end.

“The 106 page book is filled with pictures and letters written by the Honorable Elijah Muhammad. At this moment in my life, to become One with Allah, as a Believer and Follower of these two Great Men of Allah, I am learning to immerse myself into a higher thinking of two great minds.

“All Praise is Due to Allah!”

If you have that book, or any book that affects you, should have/know some of the “history” of that book.

Part of this book involves Sister Kelmer Muhammad’s words: the “soft cover book” and her words: “This feminine book helped me to understand why The Minister was chosen to sit in the seat in the absence of our Leader, Teacher and Guide, the most Honorable Elijah Muhammad.”

Chapter 1—9 was already completed. But the book itself was not finished.

Some events happened, at the end of a series of events that happened, in 2004 through 2006 that cause me to call some others, to help me with what was in my mind.

The word “resemble” (in my dictionary) means: “have qualities or features, esp. those of appearance, in common with (someone or something); look or seem like; they seemed to resemble each other closely.”

I had a vision that involves the Honorable Elijah Muhammad and the Honorable Minister Louis Farrakhan that caused me to contact two Brothers, to help me to begin the process of forming Closing The Gap.

I’ve written of this “vision” in Closing The Gap and Minister Farrakhan’s reaction to that event.

You can read the names of those who helped me, in the production of this book on pages 439 to 440.

In Closing The Gap we can read:

“Is it really true that God permitted Black people to be enslaved in America that we might help her become the fulfillment of that which ancient Egypt was a sign of today (God’s greatest opponent), even though most Americans don’t yet see this?

“Could it really be that we were under extreme pressure, to be made to be the people through whom the Messiah would come, as it’s written in America’s best selling book, the Bible?

“Could it really be that America’s only way to live beyond this the most critical of all times, is to heed the words of two of her ex-slaves: the modern Moses and Aaron of today—the Honorable Elijah Muhammad and Minister Louis Farrakhan?

“Could it really be that Jesus and Paul are also two powerful signs of these same two men?”

In the book Closing The Gap, you can read Minister Farrakhan’s words:

“The Honorable Elijah Muhammad one day told me of Clarence Darrow and President Woodrow Wilson, and he said, ‘The degree of knowledge that they had of the English language was profound.’ He said, ‘… that’s why Clarence Darrow never lost a case.’ ”

One—just one—of my reasons for writing that paragraph, in that book, and this article, was because the Honorable Elijah Muhammad, some years ago, when he came from Chicago to Phoenix, told me about that which you can read, in Closing The Gap.

Now, does the above involve my reaction to Sister Kelmer Muhammad’s words? Yes!

Sister Kelmer Muhammad did not know of my reaction to her and why I wanted her reaction to that book and the other book in my article for this newspaper The Final Call.

At the very end of June 1954, I had an experience that changed my mind 100 percent. Then I went to Temple No. 7, (which was called that at that time) on a Sunday.

The next year (1955) I first saw Minister Farrakhan.

Allah willing, I will end this series of articles, next article.

I hope this series help others to see why the Honorable Elijah Muhammad chose Minister Farrakhan to sit in his seat!

This is the time of judgment.