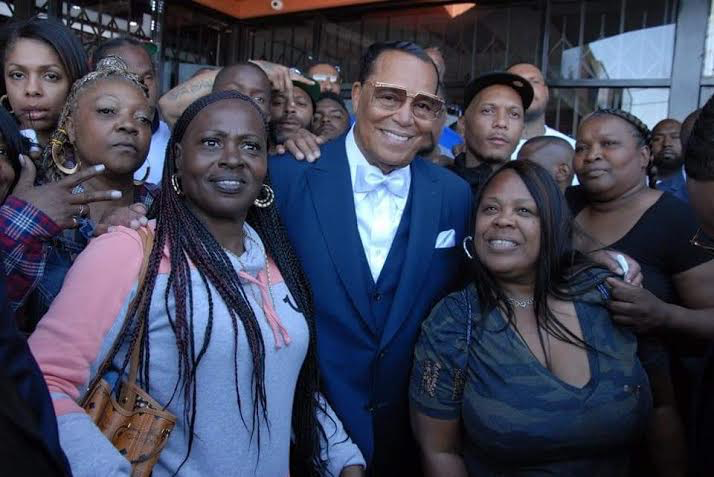 [Editor’s note:  The following article is a continuation of edited excerpts from the Thursday, June 11, 2015 interview with the Honorable Minister Louis Farrakhan on Cliff Kelley’s The Talk of Chicago program at WVON Studios in Chicago, Illinois.]

Cliff Kelley (CK):  Brother Minister, you have gone into great discussion about “what’s going to happen,” “how we’re going to end this,” and there’s going to be “justice, or else.”  In The Final Call, March 24, 2015 (FCN Vol. 34, No. 24), your cover read “Why America’s Race Problem Won’t Go Away.”  Can you tell us about that?  Because, it seems as though what you’re saying is that there is something that’s going to be done to end this out-and-out racism, and the things that we are subjected to on a daily basis.

The Honorable Minister Louis Farrakhan (HMLF):  You know, White people like to call me a “racist.”  And we don’t have the power to discriminate.  …  “Race” is a big factor in this present world as it stands.  It’s still present in the school system; it’s still present in the system of jurisprudence (law).  Ferguson was just a “dot,” or a microcosm of a macrocosm of injustice to Black people in the cities and towns of America.

Are we the only ones that speed?  Are we the only ones that have a taillight that’s broken?  Go downtown and see who’s at traffic court, see whose money is being siphoned out of the Black community so that the city government can continue to do what they do.  This is done all over the country…  Where are these cameras?  Are they in the White communities stopping them as they speed through the lights and whatnot?  Hell no!  They’re in our community, to suck the life out of us.

I am saying this to you, and to the city councillors:  You are the defenders and the protectors of the people that you represent.  The injustice that’s done to us is multi-tiered …  You talk about “multi-level marketing”?  This is multi-level tyranny.

Now, I went to see this movie San Andreas (2015), and, my goodness:  That earthquake was something!  I think you all should go see it, because you’ll be seeing it for real in just a few days.  God is not mocked.  Jesus said, “As a man soweth the same shall he also reap.” See, what did you do in the time that you were planting the seeds of ‘race’?  And what will you get when it’s harvest time for the evil that you’ve done?

So, Cliff, when we look at this in the light of that kind of scripture, Obadiah The Prophet said “as thou hast done” (past tense) “so shall it be done unto you” (future tense).  So what is “judgment” like?  When you “reap what you sow,” how does that look?  …  I know these people would like to say Farrakhan is “ISIS,” The Nation of Islam is “ISIS.”  Don’t put that on me!  You say, “Farrakhan, he’s talking like that.  He’s radicalizing the Black community!”  No!  Hell no, you are radicalizing the Black community by the evil that you continue to pour on this community!

What do we mean “Justice as a Weapon”?  Elijah Muhammad said, “if justice prevailed, there would be no need for a judgment.” But since unjust and wicked people have been in positions of power and governance over the people—and there is no justice, there’s 100 percent dissatisfaction all over the Earth—then governments, now, have to pay money to mobilize their police and then militarize their police.

The immigrants that came, bless you immigrants. “This is ‘a country of immigrants’!”  Yeah, but it’s a country of immigrants that built your “dream” on the back of The Black Man, and our slavery.  We made the country rich, so when you came, you could find your American dream on our nightmare.  But what’s coming?  What is coming?  You better think twice!  That’s why in the Bible, The Son of Man was being asked, “What’s the sign of ‘the end’?”  The Son of Man said:  “This wicked and adulterous generation seeketh after a sign.”  “Adultery” is like drinking water in America (“Whose wife did you have today?  Whose husband did you get tomorrow?”)—no, no, no…  You are seeking after “a sign,” but the scripture said, “no sign shall be given to you except the sign of Jonah.  As Jonah was in the belly of the great fish three days and three nights, so shall The Son of Man be in the heart of the earth.”  Why Jonah?

Let me tell you something my Black brother and sister:  You’re not getting out of this easy, either, because the killing that is going on by us against us, you have to pay for that.  And you know what the Honorable Elijah Muhammad told me?  See, your refusal to accept The Plan of God (to separate into a nation and a land of your own):  You don’t want to leave!  You don’t want to leave the foot of your slave master begging for the crumbs from his table like Lazarus; you want to stay.  So stay—because he wants to take you down with him when he goes.

So because you would not listen, and you have not listened, then watch what is going to happen:  The Honorable Elijah Muhammad said God is going to force the enemy to treat you worse and worse by the day!  Every day he is going to treat you more and more evil!  Don’t think you’ve run out of hearing about “Black suffering” and “Black death and slaughter”—oh, no …  It’s going to increase!  Increase for what?  So your “agreement with hell,” as Isaiah the Prophet says, “will not stand.”  You’ll have to come away from your 400-year-old enemy, and build a nation of your own, or suffer the consequences.

I’m just a warner …  I do have “a dog in this fight”; but, I’m just warning you:  You are going to face everything I say, because I am not speaking of “my own.”  I am not “the leader” of The Nation of Islam, I represent The Leader of The Nation of Islam who is the Honorable Elijah Muhammad.  And every word that that man spoke:  You will see it!  You will feel it!  And some of us will feel the chastisement of God for this foolishness that we are carrying on just because we have been made haters of self.

CK:  One of the things I wanted to ask you, if you want to comment on this at this point, is about “Chiraq.”  Do you want to say anything about the situation with Spike Lee?  And of course, Father Michael Pfleger is involved in that as you well know.

HMLF:  I talked to a lot of young people who came to The Salaam Restaurant, and some were very vocal about Chicago being called “Chiraq.”  And I understand that name is offensive to some, but what is most offensive, [and] should be to all, is the killing that is going on in this, one of the greatest cities on our planet.

When I went out a few years ago [2012], and walked the streets of the inner city going into all the places where the guns were firing and young people were dying, I went into one ward—and I will not mention the councilman’s name, but he said these words; he said:  “They don’t seem to care what is happening to us as long as its confined to where we live and it doesn’t spread out to other neighborhoods.”  Because Chicago:  It’s one of the most beautiful cities in the world, and people come from all over the world to bask in the majesty of what Chicago offers.  And so, the big people don’t want to see us little folk disturb the “flow” of American citizens, and citizens of the world, coming to see Chicago; so they don’t come to our neighborhoods—you know that; they are downtown.  So some of our young people have gotten kind of bold, and started running through downtown, now, acting up.

I want to say this:  You know, you are the most beautiful people to me.  I’m in love with you.  I can defend you …

As I said to President Obama: “You should really recant [the “thugs and criminals” comment], because you are the President of the United States of America, and it seems like maybe you forgot how America became “America.”  Do you remember “the tea party”?  Not the political “Tea Party,” but The Boston Tea Party.  It took place in a city where I grew up, in Boston:  Those who took all the tea off of that ship and dumped it in the sea, that was a criminal act from the viewpoint of King George—but the patriots saw it as an act of rebellion that brought about a war that brought about the country that the president is now president of.  So whose side are you on?  Are you on the side of “King George and the tyrants,” or do you see in the rebellion of our young people something that we can do to change that reality?

They are not thugs.  They are not criminals.  They’re angry—very angry; because while we were running into the Civil Rights Movement, running for maybe a White girl, or a Black boy, the country was falling apart, and our children were being left in the lurch.  Because we were chasing money rather than baptizing our children with the knowledge of how rough the road was that brought us to where we are today; how bitter the chastening rod of God was!  Yes, you didn’t teach your children what we’ve been through, so they think “it’s all over” when it’s not.  So don’t continue in ignorance, for the ignorance that we are displaying is really our worst enemy.

We have been victimized in this way by those in high levels of government.  We are victims.  We can do better.  We can’t continue to charge somebody else, we can make this city better, we can make our communities better.  And with men like Father Michael Pfleger, Reverend Jeremiah Wright, Louis Farrakhan—and there’s a host of great Black men and women in this city who are “stakeholders”.  Maybe that movie will feature some of that, in an organized way, doing things to make Chicago better.

CK:  “The Snoop collaboration” [for your forthcoming album].  Can you tell us about that?

HMLF:  We met in Hollywood, and I said to brother: “Rappers are the new leaders of the youth all over the world.  And if they would accept the responsibility of their leadership, and they had the right wisdom in their raps, we could take these young people away from their governments that are misusing them, and their patriotic zeal, sending them to fight wars not for ‘democracy,’ not for ‘liberty,’ but for oil and the riches, resources of other nations.”  So, Snoop went away; and he came back with a song, and that song is called “Let’s Change The World.”

You know, God has chosen us, Black people—the despised, the rejected, the unloved, the unwanted:  He chose us to be the cornerstone of a brand new world and civilization; but we just have to clean up.  That’s why Jesus said, “Wash and be clean”; and that’s why the scripture also said, “When he comes, he’ll be like a refiner’s fire and fullers soap.”  Let’s clean up.  And let’s get up, and stand up, and let’s be the cornerstone of a brand new world.  Let’s Change The World.