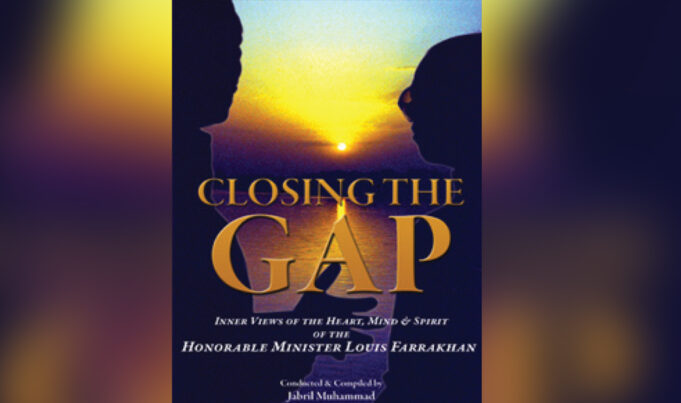 We are into one of the crucial areas of this book—Closing The Gap. The word “crucial” means “vital to the outcome of something.” To me all of the answers the Honorable Minister Louis Farrakhan gave in this book are “crucial.”

Brother Jabril: Brother Minister, about a week and a half ago I showed you the chapter, titled, Minister Farrakhan’s Magnificent Answer out of the little book, Is It Possible That The Honorable Elijah Muhammad Is Still Physically Alive???”

You were somewhat amazed over your own words in it. There have been many instances where you looked back at words that you have spoken to me, in interviews, such as this interview, and in your speeches, etc., with utter and genuine surprise. Please comment.

Minister Farrakhan: I was with the Honorable Elijah Muhammad one day and they were playing a tape of him speaking. He made a point and he applauded. He was excited and he said, “Boy, Allah really gave me something there.”

Well I’m like that too. You give me a question, I give you an answer, but the answer comes as inspiration. Then if I’m blessed to be able to read what I said, sometimes I ask the question, ‘Did I say that?’ Well I didn’t say it. He said it through me, but now I’m fascinated and often overwhelmed by what came out of my mouth.

It just drops me almost to the floor in humility, to know that God would use me in this way to glorify Him and His servant, the Honorable Elijah Muhammad, and to help our people, and the people of the earth, out of the condition that 6,000 years of Satanic rule has put humanity under. I am awed and overwhelmed that Allah saw fit to use me in such a magnificent way. You are right.

To see the end of your faith, meaning to see the flourishing of what your faith has shown you. Although I may not live necessarily to see all of it because there’s so much that the words of the Honorable Elijah Muhammad causes one to see, but at least, to get a glimpse into the Hereafter would be a tremendous blessing.

Brother Jabril: Well honestly I feel, you are going to get more than a glimpse. I earnestly believe that. Of course, many might say, “Well, that’s just you talking, Jabril.” But I believe that. I want that for you, my Brother—and all of us.

Minister Farrakhan: For all the Believers.

I began to ponder over the unique power of speech that Allah blessed Minister Farrakhan with (and us through him) early, while I was still in the hospital, last year February (2007). Then, during the first few weeks, I was hardly able to speak clearly. I could not write one word of anything. But Allah blessed me to be able to think and to observe—not to moan. I was in school.

I do not intend to spend your precious time writing about the condition (aphasia) that Allah is blessing me to overcome. I intend to share this elsewhere, Allah willing. I’ve been writing in this column from the time the newspaper was published up to right now. Its purpose was and is to bear witness to the truth of the person, teachings and the mission of Minister Farrakhan and his relation to his teacher and to Almighty God Allah.

I had an experience that provided me with an a little more insight into what I already know, while I was yet still in the hospital last February. I intend to continue this by the help of Allah, in the next few articles.

Jabril Muhammad: What is the key in the interpretation of anything, especially in what you intend to do in the Beethoven violin concerto on February the 13th in Los Angeles?

Minister Farrakhan: In order to properly interpret anything that has been said or done by another, one has to be in harmony with the mind and the spirit of the one whom he or she desires to interpret.

People that wish to interpret the word of God cannot do so properly without His permission. That person must be in tune with the mind and the spirit of God, as He revealed His word, in order for one to properly interpret that word.

For example, to study a prophet, whose heart was so humble that he could receive revelation from God, and in order for you to even approach the meaning of that revelation of that prophet, you would have to be in the same spirit of humility of the one who received God’s word, for God to open that revelation up to you. Based upon your capacity to grasp, God gives you.

In upcoming articles, are such questions as, how he (Minister Farrakhan) uses adversity in his life to advance the cause of Allah. He also insightfully answered several other questions, including the divine purpose and place of chaos in the overall divine plan for our perfection and the fundamental spiritual scales, which must be removed from our eyes, if we are to make the progress we can to fulfill the purpose of Allah for our lives.

Meanwhile, study these words of Mother Tynnetta Muhammad’s article, Volume 21 No. 21, part of which reads:

“The Honorable Minister Louis Farrakhan outlined ‘Eight Steps of the Atonement Process’ while delivering to us, and the world, the Redemptive Message that was intended to put us on the road to a high civilization as he addressed nearly two million men gathered for the Million Man March in Washington, D.C., on October 16, 1995.

“It is due to this continual disrespect of the Principles of the Brotherhood to Practice Unconditional Love among us that is leading to distrust, immorality and a decline in our success as a people that is separating us into groups to be judged by God. This lack of discipline in our lives is also separating many from the bright light and example of the Honorable Minister Farrakhan while we are being grouped into ranks, some of whom are revealing themselves as uncongenial company.

“The Prophet was not made totally aware of the mischief-makers and their various machinations; only Allah and His Angels were given charge over them. Those who read these words may take note of their actions and better recognize who they are. Such uncongenial company will soon be removed from among the Believers by Allah, God, Himself, Who is sifting and testing us through trials and tribulation, as the Most Perfect Judge.

“Being guided by Allah’s Spirit, I will only say, All Praise is due to Allah for His Presence and Saving Grace. Without His Abundant Mercy and Forgiveness, none would escape the Divine Chastisement of Allah. The Holy Qur’an reveals in Surah 8 that the threatened punishment would not come while the Servant of God was still in our midst; but once he was removed, the executioners would come. This is a True Prophetic Picture of our present condition today.”

The Honorable Elijah Muhammad has stated that, “Disagreement is like a lighted fuse.” He also said that “agreement is the basis of love.” Believers should be 100 percent in agreement with Minister Farrakhan’s study guide 13, that he is asking us to study.