A Lion in a Cage’

[The following article reflects the theme of the spoken word delivered by Mother Tynnetta Muhammad at Muhammad Mosque No. 27 on California Day invitation by Western Regional Minister Tony Muhammad.]

“O Prophet, strive hard against the disbelievers and the hypocrites and be firm against them. And their abode is hell, and evil is the destination. They swear by Allah that they said nothing. And certainly they did speak the word of disbelief, and disbelieved after their Islam, and they purposed that which they could not attain. And they sought revenge only because Allah—as well as His Messenger—had enriched them out of His grace. So if they repent, it will be good for them; and if they turn away, Allah will chastise them with a painful chastisement in this world and the Hereafter; and they shall have in the earth neither a friend nor a helper.” –Holy Qur’an, Surah 9, verses 73-74

Where are we on the page of history in this present moment of time? Is there a limit to the time that we have known? In the Book of Revelations, a powerful angel identified as the seventh angel stands up in the 10th chapter and announces that the mystery of God has been revealed. He determines a timeline to the work that was commissioned by God in the final judgment of this world. He then raises his hands to heaven, as in the position of prayer, and cuts a shortage in the atmosphere so that the atoms themselves would burst into flames and engulf an area that is measured by 2,000 miles by 3,000 miles, which describes an area equal to the size of the USA. All one has to do to recognize this reality in a microcosm of the macrocosm is to visit or to live in the state of California, particularly the southern portion, where a multitude of hostile elements are confined to an area that reaches from the north, near the border of Canada, to the south, touching upon the border of Mexico. If we were to throw a plumb line across the border of Mexico (which would include the Gulf of Mexico) sweeping through the island of the Caribbean to the east coast, we would have proportionate to the entire United States one of the most turbulent areas in the world. Open seas, oceans, lakes and rivers surround her on every side, in what was once considered a wilderness, and is still described in the Supreme Wisdom Teachings of the Honorable Elijah Muhammad as the wilderness of North America. When the seventh angel stands up, sounding the final trumpet call of judgment, he places one foot on land and the other on water, while raising his hands to heaven with the announcement that the time we have known we will know no more. The Honorable Elijah Muhammad has given to us the fullness of what all these scriptures mean. Perhaps, in all of America, the climate of adversity that we observe in the state of California—from politics to city and state governments, to domestic and gang warfare, natural ecological disasters, with fires at this present moment still burning in parts of the state; transportation in large portions of Los Angeles have been interrupted by a strike and market food chains being picketed and seismic activity having been reported near Pomona and surrounding L.A. areas—she reflects more critically than the rest of America at this time, a steaming climate of unusual change taking place within her society. We might take note that this area, Southern California in particular, with Los Angeles as a focal point, was home to Master W. Fard Muhammad during a period of His preparation upon entering UCLA prior to His announcement of His presence in 1930 on July 4th. 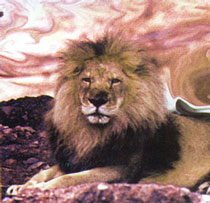 I chose the title “A Lion in a Cage” from the 31st Problem of the Nation of Islam Supreme Wisdom Teachings, because the Master chose this imagery to reflect our condition in America being caged in or confined and restricted inside of a cage in the country where we were captured as servitude slaves. The Lion King being of noble earth and royalty represents our Nation confined and restricted for more than 400 years. When He first arrived and stood at the door of this confinement, He initiated the first stage of our flight or exodus out of the cage to freedom, justice, and equality. Upon His raising the Honorable Elijah Muhammad from the mentally dead condition that we were in, the responsibility was given to him to reflect the Master’s continual presence in the final judgment. Upon the departure of the Honorable Elijah Muhammad in 1975, the second door in the process of our liberation and redemption was completed, followed by a third doorman and his attempt in getting our nation and people out of the constant reign of terror that surrounds us in America. This role was given to the Honorable Minister Louis Farrakhan as the great helper in this cause. We have come to the end of the grace period and the timeline of history measuring 2,000 miles (years) by 3,000 miles (years), which equals the 6,000 years that our entire planet has been caught in a vacuum of Yacub’s civilization, bringing to fullness the mischief and bloodshed on our planet that has never been experienced before. The hypocrites and disbelievers among us will not believe the truth that is being manifest all around us, up to the end until the destruction of our open enemies and opponents in America surrounds and engulfs city after city, state after state, in a virtual lake of fire. “Those who taunt the free givers of alms among the believers as well as those who cannot find anything (to give) but with their hard labour—they scoff at them. Allah will pay them back their mockery; and for them is a painful chastisement. Ask forgiveness for them or ask not forgiveness for them. Even if thou ask forgiveness for them seventy times, Allah will not forgive them. This is because they disbelieve in Allah and His Messenger. And Allah guides not the transgressing people.” –Holy Qur’an, Surah 9, verses 79-80