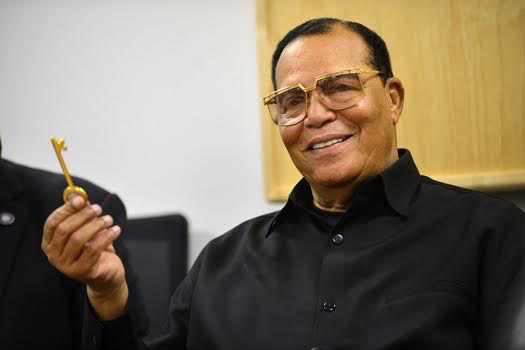 [Editor’s note: The following are excerpts from a speech delivered by the Honorable Minister Louis Farrakhan at Saint Bridget Catholic Church in Los Angeles, Calif. on May 1, 1996, to an audience representing various Indigenous peoples of the Earth.]

The Honorable Elijah Muhammad told us that there would come a time when the Black, the Red, and the Brown would come to great power in this land, America—the land that belongs, originally, to the Indigenous people.

Our Native American brothers and sisters always refer to our planet as “Mother Earth”; and talk about caring for Mother Earth. Since we are all from Mother Earth, we cannot care for the Earth if we do not care for what the Earth produced in us.

The Earth has many different hues, or colors; the rocks have many different hues or colors, and in God’s Infinite Wisdom, He created planets that show up with different colors. No color should pride itself of itself, for it is all a part of something bigger than itself. So these colors are the result of a Creator Who is Wise in His Creation. But wickedness caused some to make color, or the lack of it, a badge of honor in order to discriminate, separate and oppress others on the basis of color.

Our common thread which binds us

Dear brothers and sisters, the Spanish-speaking people of the Western Hemisphere, who are not Spaniards, are Indigenous people who had the Spanish language imposed upon them by Spanish conquerors. The Spanish names that you wear are not your names anymore than “Johnson,” “Jones,” “Smith” and “O’Reilly” are the original names of the Black descendants of slaves in America. You have original names that belong to the Indigenous people of this hemisphere, and sooner or later, you will return to those names and discard all remnants of your oppressors.

This time period we are living in is the time period of the rise of Indigenous people. There is something happening all over the Earth that the Indigenous people are rising to reclaim what The Creator gave them from the beginning. On the isle of Nippon (Japan), the Ainu people, which are the original people of that island, are rising. In China, you have some very dark people that are the original inhabitants of that country. In Australia, the Aborigine is rising. In New Zealand, the Maori is rising. In Papua, New Guinea, and all of the islands of the South Seas, the Indigenous people are rising. The beauty of what I see in this humble and magnificent House of God is the beauty of the Indigenous people, again, rising. My desire is for us to know and understand that there is dormant power among us that must be awakened and used to create change.

Using our power to speak to governments

Fifty years ago, it was difficult for a person of the homosexual lifestyle to be bold and to come out of the closet and reveal that they have a different lifestyle. Today, no politician wants to offend homosexuals, because homosexuals have united in their homosexuality to produce power to force a country that they feel disrespects their lifestyle. Well, if homosexuals can use the power of their unity to force a country that is supposed to have Puritan values, Christian values and Judeo-Christian values at the root, to overlook those values, then what is wrong with the Indigenous people uniting and creating a power that will force an immoral government to recognize the value and show respect to and for the original inhabitants of this part of our Earth?

Now, I am not a politician, and I have never liked politics, because I don’t think, for me, I can be “all things to all people” lest I end up being nothing to myself. I love being able to speak truth unfettered by political considerations. Therefore, I can never seek any political office because I can’t be false. However, these false politicians recognize the power of the vote, but have no respect for your color or your ethnicity, or the fact that you are the original inhabitants of the Earth. The only way we can speak power to power, is with power.

On October 16, 1995, at the Million Man March, we talked about the attainment of economic and political power. What we must do today is that we should never again refer to ourselves as a “minority.” You are not a minority in America; the Caucasian is the minority. You and I are the majority.

This is not racism. No Black person has a right to refer to themselves as a minority, because as long as Black people think that they are not linked to their people—the Black and the Indigenous (Original) people all over the Earth—then the enemy to our rise can make us think as a minority. There are 4,400,000,000 of us, and we outnumber the Caucasian 11 to 1, so we are not a minority. We are the majority, and we ought to begin thinking like the majority.

We lack political power, but together we can shake this racist and oppressive foundation, because all of the rich have built their world on the backs of the poor. The political parties of this day do not want the Indigenous or poor people to have any benefit from a government that poor people fight, breathe, die and pay taxes to maintain, and we are taken for granted. What we are looking for is a change in our condition.

If these political parties build their strength on the masses, and yet do nothing for the masses, then we have a legitimate right now to impose our will on a government that is not moral. We have to send a serious message, followed up with strategies that can force change. You have more power than you even realize that you have, and that power is not from outside yourself; that power is from within yourself.

I don’t know what that means to you, but what it means to me is that God has put a power in man and woman that allows you to control the storms not only in your personal life, but you have power—if used properly—to control the natural storm. Anytime a Native American can say ‘‘I’m going to pray for rain and do a rain dance,” and it rains, then that tells you that there is something in you that commands nature to move at your command, but you have lost that power due to lack of faith.

Today, we are now being called upon to move a mountain that is in our way. And we believe, with God’s help, we can make a difference.

All over the world, people have to gain merit by the righteous things that they do, and not by the color of their skin. We now must rise because Allah (God), The Great Spirit, or whatever name we wish to call The Creator, is calling on all of us to rise up and rid ourselves of the shackles of ignorance, self-hatred and division.

How are we going to accomplish this? We first must understand our own roots. How far back does your lineage go? How old are we? You can’t even find the birth record of the Native people of this Earth. As far back as you go, no rock will show you your beginning; no star will show you your beginning, because we are from the beginning. And as it was in the beginning, so shall it be at the ending of this world that has pit color against color; people against people; language against language.

Ultimately, we have to unite the whole Western Hemisphere, from Canada all the way down to the tip of what is called South America. The only way we can unite the continent is we have to have a vehicle by which to communicate ideas to each other. If Spanish is that vehicle spoken by most of the people of the Western Hemisphere, then we must learn Spanish in order to communicate our ideas one to the other.

A committee of scholars should listen to these issues and distill these issues into an agenda that all of us can stand on together, just like the agenda that made the Million Man March successful. And if all of us can stand on that agenda, then we present the agenda on behalf of the oppressed to the Republican Party, the Democratic Party and the Reform Party. After they had their conventions, then we call a “Convention of the Oppressed.” With all of us standing on this agenda, and with the millions of Black, Native American, Latino, Asian and Arab and poor White votes, we will shake this country to its foundation.

What will the political parties do for us if we stand together for what is in the best interest of all of us and our children? And even if they don’t do, what we have created is a revolution. That revolution is not a “bloody” one; it can get that way, but the masses of the people now are aware, awake, and refuse to be cowed (intimidated) any longer. The government has to listen.

When you get people united, you can change laws. When you get people united, you can change minds. If all of our economic power can be combined with strategic unity, along with what we have learned from higher education, we can begin to develop the Earth, and have respect for it; and before you know it, we become a power inside America—masters in the land where we once were oppressed. God, then, will see how we will act. It is one thing to be oppressed and blame somebody else for their evil done to us, but when God brings us back to positions of power, how will we act toward others?

I hope that the Native tradition of all the Indigenous people, which is justice and the respect for the elders and taking counsel with the wise, will always be our way of ensuring that justice be done for all.

The first demand that we, as a people, must make is on self. Black people: Don’t ask anybody to do more for you than you are willing to do for yourself. Native people: Don’t ask Washington to do more for you than you show your willingness to do yourself. If we do this, then, together, we can make a demand on the government, and a demand on corporate America, for our share. As long as we are in unity, they will never be able to deny us.

May God bless our efforts and let us hope that the Black, the Brown and the Red will never allow our oppressor to divide us and pit us against each other again. Your hurt is our hurt. Your pain is our pain. And so when your pain is relieved, ours will be too; and that is the way we have to feel. We are one body; one family.