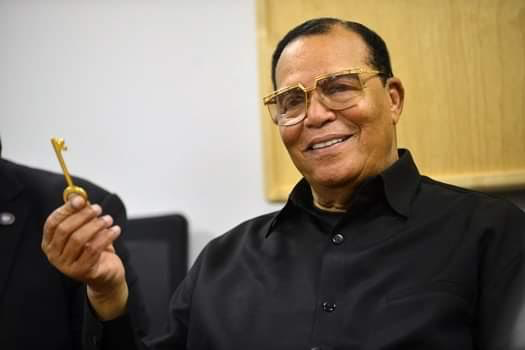 [Editor’s note: The following text is excerpted from “A Torchlight for America,” written by the Honorable Minister Louis Farrakhan, 1993.]

It’s said that most of the congressmen, the representatives of the American people, are from the wealthy class. The wealthy and the privileged in this society, who have benefited most from the federal debt, corporate restructurings and plant relocations, are the people charged with representing the poor. Can they adequately represent the poor?

In the 1992 presidential debates, a young woman asked the candidates how can they, who have never known suffering in their lives, lead the American people and bring a healing to what ails the country? The closest people to the proper representation of the masses and their suffering are the Blacks, women, Native Americans, poor Whites and Hispanics. In the Congress, the closest representative of the poor is the Congressional Black Caucus. Each year, they have developed and presented before Congress a budget that would keep America strong, while at the same time looking out for the masses of America’s people. Each year, their efforts have been belittled and their budget has been voted down.

It’s our peculiar relationship with suffering that has prepared us for leadership today, and it is precisely because we have an intimate understanding of the devastating effects of being subject to greedy, racist, sexist, immoral leadership, that we have a chance, if reformed, to be a torchlight for ourselves and for all of America.

In truth, the poor are voiceless in society as it is presently structured. Every president in recent history has been of the privileged class. This does not mean that being wealthy disqualifies one for leadership. Being wealthy does mean that there is a lack of an experiential vantage point that we must pay careful attention to.

It was Mr. Ross Perot, among all the candidates in the ’92 presidential election, who recognized—and openly stated—that the wealth he has achieved is from the poor. Now he sees that same country and those same working-class people who gave him the opportunity to be a billionaire, going down the tubes.

Jesus said in his sermon on the mount, “Blessed are the poor in spirit: for theirs is the kingdom of heaven.” (Matthew 5:3) How can you be blessed and poor at the same time? How can you be blessed when you’re barely surviving or can’t feed yourself? Jesus meant that out of the poor will come the Jesus who can lift the poor. This is why the rulership of that day feared Jesus. In him they saw the end of their power and the end of their rule.

A SOCIETY OF PERVERSE INCENTIVES

It’s the greed for short-term profit that has generated an entire society devoid of values and that alienates the poor and the few non-greedy. Most of the incentives and many of the laws in the society are corrupt.

As an example, more is paid to professional athletes than society’s teachers. The teachers have to work two jobs to make ends meet, yet they are responsible for shaping the future by shaping the minds of our children. I’m happy to see the Brothers and Sisters in sports and entertainment making money. However, I am appealing to them, what are you doing with the money to help your people? What kind of opportunity is paraded before our young, when there are only about a thousand positions for our talented sports figures, but there are millions of Black children suffering, who can never become professional athletes to escape from their condition?

Legislative policy and tax law is perverted to work for the rich. The political action committees (PACs), the lobbyists, the special-interest groups, all work for the rich. The rich get a capital gains tax break. The corporations get to write off special deductions and interest on loans. The poor get nothing but the burden and the blame. The lowest rung of the workforce is made idle through plant closings, and America spends next to nothing to retrain them to make them useful in the economy.

Pride and arrogance are part of the leaders’ mentalities. This spiritual disease is what blinds them to the true formula for success, because they’re trying to keep up a posture in the world that is out of step with the will of God and the demands of the time. They want to maintain themselves as the great imperialist power, the overlord, the slave-master, the god beside God.

It doesn’t profit America’s leaders to lose the respect of the people who have sacrificed to build this country. The American worker has worked and sacrificed to build this country. The corporations, the high-paying government jobs, the fine material possessions, all of this was built on the backs of slaves and the labor class. It is wrong for companies to leave the poor and the working classes in the lurch—conceding manufacturing to other nations under the guise that America is becoming a more service-oriented economy.

It’s the failure to deal effectively with this old mentality of slave-master and slave that has taken the country to the brink of ruin. If America does not deal with this mentality—which is rooted in the outdated relationship between Black and White—then America is doomed.

Manufacturing is the bedrock of self-independence. Why should America let others produce for her what she can produce for herself? Why should Italy produce all the shoes while the American shoemakers sit idle at home? Why should your garments be fabricated in Taiwan while your own plants close and collect dust? America could see the simple solutions to its problems if America were not blinded by greed and that old mentality of slavemaster and slave. Both mentalities have to be broken and replaced with a sense of community, humanity and fairness structured on truth and the principles of justice and equality.

THE MENTALITY OF BLACK LEADERSHIP

Black organizations and leadership must focus on self-help. We should create a forum in which we can convene regularly to discuss the troubles of our people and develop solutions that we can execute on our own.

Each Black organization and every Black leader has a role in the upliftment of our people. We must recognize and respect each other’s role and learn to work with those with whom we may be at variance ideologically. We should consider establishing a united front for the purpose of converging our efforts to meet common objectives over one, three, five and 10 years.

As a people, we must recognize and understand that, in order for America to survive, she must tighten her belt, and all of her citizens will need to make sacrifices. The country is not in a position to give away because it has mortgaged its future. Even its veterans, who have fought to maintain America as the number one military power, will need to make yet another sacrifice.

Therefore, Black leadership cannot go to the government to beg it to provide a future for us. Putting the beg on America is not a wise program for our leaders to advance on behalf of the people. That old slave mentality that keeps us at odds with one another and dependent on White people has to be broken.

Black leadership must champion the strategy of turning within to do for self. Meaning, we must teach our people to use our talent, time and money, and pool our resources educationally and financially, to address our troubles. Whatever America decides to do, our actions cannot be dependent on the actions of a benevolent, White, former slave-master.

Even though this country owes us reparations, in her present condition what she owes will stay on the back burner or not on the stove at all. We must work harder to address our own problems. We must also provide the country with solutions that benefit us as well as the whole, to pull the country to a state of strength. Perhaps, when the country’s condition improves, we can speak more effectively about what is owed to us for our services, past and present, to repair our condition.