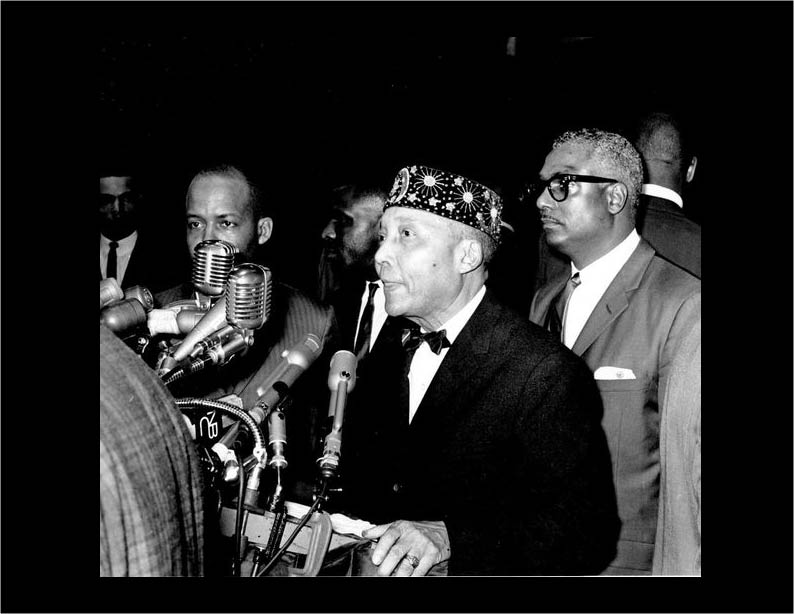 MUHAMMAD SPEAKS is the greatest paper in North America. It teaches us of the Divine Last

It strengthens the Black Man. It makes him desire to stand up and do something for himself.

Our people are reaching for the truth before we can get it to them.

College students are writing us. They have heard something about that wonderful word that has revealed to the Lost-Found in the wilderness of North America.

This paper has begun to help us give life to our people. It helps us financially, and in every way with our mosque, and with other programs that we have other than the rent and purchasing of mosques. I think we should get behind the paper! It is helping the Nation and in helping the Nation you are helping yourself.

A new paper is in the public. A 100% original paper. Over a million copies is in the hands of the poor Lost- Found Nation of Islam and they are reading it.

We should be able to sell one million copies of this great paper, Muhammad Speaks. Look how it has grown! It is selling tremendously because it is 100% original.

The demand is growing greater and greater for our paper. Think what we can do if we can get this paper into the hands of one million Lost-Found every issue!

Everyone wants to hear Muhammad Speak. If they can not see Muhammad, they want to read what he is saying. If the word can do this much for our people, then the Prophets predictions are true. Just the truth alone is enough the Word alone is sufficient. The Word alone is power and life…don’t need anything else. The Word alone is sharper and more powerful than the little sword.

If I were out there, I would say, “bring me a Muhammad Speaks.” In this great city of Chicago, with hundreds and thousands of our people all around here on the South side, we have moved up greatly. From two to three thousands papers now selling around thirty thousand copies here in a few days.

I don’t want to say that there is room from improvement. It makes a man think he is not improving much. I want to say this. We were good yesterday, according to the Word of God and the work of the universe which he created. Allah created the heaven and the earth. He reproduces it. He doesn’t let it stand still. It is ever revolving and is doing still more. Since we are in the circle, we are never satisfied with our accomplishments. We must always be seeking to do better!

Never be satisfied to stand still. Always seek to do better. If you sell Muhammad Speaks you are doing the work of a minister.

I think we can sell a hundred thousand copies (in Chicago alone). Get out and prove to Allah that we are ministers of His Word. Ring the bell and say “good morning” or “good evening”. Then say, “Muhammad Speaks.” This is sufficient.

Our people in the east want to know what you are doing for yourself.

This is your paper.

The dead is not risen unless they read Muhammad Speaks.

Every intelligent family reads a newspaper of some kind. Why not read Muhammad Speaks? They will, if you present it to them.

Going from door to door selling Muhammad Speaks is equal to charity.

Sell subscriptions for this paper to every family. Don’t force them! Just say, “Muhammad Speaks.” That’s all you have to say to them. They will buy it! Do like that. Fifteen cents, “Muhammad Speaks” or $1.80 for 12 issues.

You will sell these papers all over! We will sell one million copies in a month. If Muhammad doesn’t speak to 20 million people, then the dead is not risen! It must reach all of them. Not one should be ignored. Everyone must here Muhammad Speak!

If you get behind this paper it will help you to give charity to the cause. The paper will do the job, wherein we have been struggling in the past carrying the burden. If we get behind the paper, it will fill all of those cracks and broken panes that the storm took out because we did not have a job.

If you allow Muhammad to speak in every home, you will find that the paper will get what you have been trying to get with labor.

Since you have agreed to go from door to door to every home, this will be your charity. This is your contribution. We want subscribers to this paper. The subscriptions are very easy to sell. $1.80 for 12 issues.