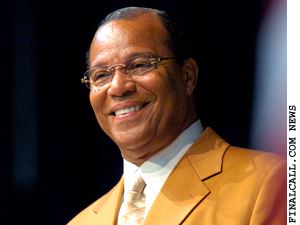 [Editor’s note: The following message by the Honorable Minister Louis Farrakhan provides the keys to peaceful resolution of conflict. The message was delivered by Minister Farrakhan on October 16, 1998 in Washington, D.C., during the observance of the Holy Day of Atonement.]

The Holy Day of Atonement is not a 24-hour day, but it ushers in a period of grace and mercy that allows those of us who have sinned and fallen short of the Glory of Allah (God) to acknowledge our short-comings, confess them, repent of them, atone for them, accept forgiveness and then, the process of reconciling ourselves to Allah (God) and to those whom we have offended allows us to become whole and wholesome and it gives us a chance to make a new start.

This period of time that Allah (God) has given for humanity to reconcile itself with Allah (God) and with self, that we may avert the consequences of our actions, is a great period, indeed. It is a period of time during which every human being should strive to take advantage of the Great Mercy of Allah (God).

We live in a world in which each year is filled more and more with violence. Violence once was orchestrated by elites or governments to take over nations and the raw materials of nations, to overthrow governments, kings and rulers who stood in the way of access to those minerals and precious stones that would lead a nation to great wealth.

This violence has gone all the way down in the society to children, especially in the United States of America, where murder, robbery, assault and rape are committed every so many seconds. However, these crimes are now being committed by children.

Some of the penologists and those who are in charge of prisons are saying that the youth are committing crimes of violence more heinous, cold and callous than anything that they have ever seen. Violence now has permeated the entire society. America, now, is the most violent, crime-ridden society on the earth.

We see so many wars going on throughout the planet, even as we speak. Civil wars, tribal wars, wars that are taking untold thousands and even millions of human lives are going on all over the earth. What is the root of this violence? Where did it start? How can it end?

We see in the first family that is recorded in the Bible and the Holy Qur’an that, when Allah (God) created Adam, He gave him very specific instructions. Although said differently than the Qur’an, but very exquisitely, the Bible says that Allah (God) made man and woman in His own image and after His own likeness.

Allah (God) gave Adam specific instructions to keep and dress the garden and gave him his wife to help him to meet the obligation, the duty and the service that Allah (God) demanded of Adam. So, when Adam disobeyed Allah (God), his eyes opened to a lower self that was hidden from him. Whenever we disobey the Divine, we open our eyes to the lower self and its call to us. When Adam and Eve disobeyed God, they became involved in a relationship that was not based on service to Allah (God) in keeping with His purpose for their creation. Therefore, their marriage was rooted in lust and not in love. As a result of that, they produced the first dysfunctional family—a family that was divided.

The nature of the human being is to submit to the Will of Allah (God). This is the best way, and really the only way, to be made secure, and it is the best way to enter into true peace and contentment of mind. However, since the first family disobeyed God, they lost the way to peace and security from the Hand of Allah (God). They were put out of the garden—a place of security—and they had to do their best to secure themselves by whatever means necessary.

From that day to this, man has been trying to secure himself, not by obedience to Allah (God), but by use of his wits, skills, weapons, lies and deceit. Why do we lie to escape consequences? It is because our nature is to be made secure. So, lying is natural or instinctive when we are disobedient to Allah (God) and trying to cover wrong or default in our duty, and the only way we do that is through the art of deception and lying.

One of the worst forms of hypocrisy is the hypocrisy of self-righteousness.

The self-righteous see themselves as better than someone that they feel ought to be condemned. This hypocrisy of self-righteousness makes the self-righteous person to want full punishment for any sinner except self, because they are blinded to their own unworthiness in the eyes of God. If I polled the members of Congress and asked them whether they have lied, they would say, “Yes, I have lied, but I have never lied under oath.”

When a president or an elected official takes an oath of office, why do they raise their right hand and put their left hand on the Bible? Why is the Bible used at all? I believe it is because the Bible is represented as a book of truth and law. The hand on that Bible is verifying that the right hand of the individual will uphold not only the constitution of the state or the country’s laws, but the connection of the right hand to the left and the left on top of the Bible should signify that the oath of office would also require that the person must uphold the truthful principles contained in the scriptures and live up to the character and principles of righteousness that is found in both the Bible and Constitution.

In closing, I give to you what Jesus gave to the people who said to Him, “Master, give us a sign of the end.” And Jesus said, “this wicked and adulterous generation seeketh after a sign, but there shall be no sign given to it except the sign of Jonah.” As Jonah was in the belly of the fish, three days and three nights, so shall the Son of Man be in the heart of the earth. Jonah means “the dove.” That’s why I have a dove on a blue background.

The dove represents Christ. The dove represents the Soul of God, the Spirit of God, and Jonah was a sign. Jonah was the only prophet who went to a city that Allah (God) had determined to destroy, and saved it. Jonah came out in sackcloth and ashes and then called on the people of Nineveh to repent and bow down. But the beauty of this story is that the king of Nineveh heard this, and the king came out in sackcloth and ashes and called on all the people to fast and pray, to atone and repent. When they did this, Allah (God) delayed His Judgment for hundreds of years.

“If My people who are called by My name will humble themselves, and pray and seek My face, and turn from their wicked ways, then I will hear from heaven, and will forgive their sin and heal their land.”