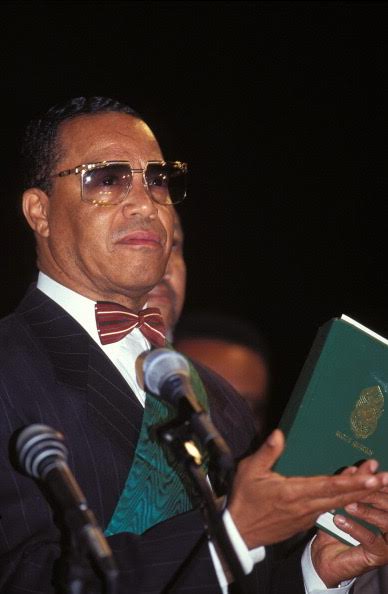 [Editor’s Note: The following edited text is taken from a speech delivered June 17, 2002 by Minister Louis Farrakhan at Union Temple Baptist Church in Washington, D.C. Prior to his speech, he announced during an international press conference at the National Press Club that he was about to embark on a Peace Mission to the Middle East and Africa. His peace mission lasted from June 20 to July 17, 2002.]

History says that those who are moved by the spirit to go contrary to the flow of traffic toward madness, and who wish to be recorded as a sane voice, though crying in the wilderness for peace, are often reviled, persecuted, maligned and evil spoken of by their contemporaries, who never quite get to know them until after they’re gone.

History tells us that good men in this world have suffered from their contemporaries and the rulers of their time period because they represented a truth that the rulers did not desire the people to be persuaded by, lest the people be persuaded against policies and the programs of the leadership that were against the Will of Allah (God). Such good men have been crucified, imprisoned, murdered and their reputations destroyed for a time. But at some point in time, someone studies their lives, someone researches the paths that they trod and writes a history; then time and history vindicate such persons. And though they are not alive to hear the honor given to them by generations unborn at the time of their journey, yet history is kind to all those who sacrificed their lives for the cause of truth, for the cause of freedom, justice, equality and peace.

This is a time of trouble like there never was since there was a time and a nation, and we (Blacks) as a people are in the midst of the trouble. Like Jonah, for whom Allah (God) had a mission and an assignment, he was running and ducking (the assignment). He got on a boat and fell asleep and the winds and the waves started rocking the boat. The people began to pray, but their prayers could not stop the winds.

They noticed that they did not hear Jonah praying, so they had to wake him up. With all that tumult going on, he was asleep. When they finally woke him and he heard the tumult, he said, “I know what this is. God is after me.” When he prayed, the water got calm. But the people on the ship saw Jonah as the source of the trouble and threw him overboard. When they threw him overboard, along came a great fish and swallowed him. This happened all because Jonah did not want to do what Allah (God) wanted him to do.

Finally, after spending three days in the belly of the fish, Jonah prayed.

He was ready to get on his job. Allah (God) caused the great fish to spit him up on dry land and that man called Jonah, or Unas in the Holy Qur’an, caused a wicked city that was about to come under the Divine Judgement of Allah (God) to be spared and a respite was pronounced by Allah (God)—a delay of judgement.

You and I, after having suffered 400 years of the worst kind of oppression and enslavement, having been robbed of the knowledge of self and spoiled, are far away from our original purpose of our creation. Yet, Allah (God) said, “They are mine and I have a job for them.” Satan did everything to Job—killed his family, took everything that he had, caused his wife to look at him like a crazy man. His wife even asked him to curse God and die. His friends turned on him. His body broke out in sores and his friends started saying he must have done something pretty terrible.

Righteous people can look like that sometimes. Their friends say, “What’s going on, you must have done something to displease God.” They don’t know how Allah (God) is working with that man in that condition. But because Job held on and never lost his faith, Allah (God) doubled what he had in the beginning and used Job to teach the lesson of patience and long suffering—that at the end of the night, there is joy that comes in the morning.

The Example of Baal

That lays a base for the mission because I feel like the jackass that Baal (in the Bible) was riding. Baal decided to strike the jackass because he would not move. The jackass started speaking with a man’s voice to the rider, because the rider was blind, but the jackass could see. What did the jackass see that the rider did not see?

You, as a people, have been ridden by false leaders—racist White supremacists. You have had a false god on your back riding you and you have been going to hell under that rider. But when Allah (God) spoke to the dumb one, and the dumb one began to speak to the rider of what he saw that the rider did not see, the rider started to beat the jackass a little more. I see the Angel of Death in the path of America that President George Bush does not see. The administration does not see the Angel of Death that stands in the path of America. Speaking with a man’s voice today is the role of the jackass.

We cannot allow America to be led by the blind, spiritually dead and wicked, and we, like dumb jackasses, say nothing while preachers preach that, “As a man soweth, the same shall he reap” and “He who lives by the sword will die by the sword.” If you know that and you keep silent, then you are aiding and abetting the wicked. Then, whatever Allah (God) brings to the wicked, you deserve it, too, because you did nothing to stop the wicked from their wickedness.

You may ask, “Farrakhan, why would you go across the water to make peace when the ghetto that you left in Chicago and where you stand in Anacostia is not in peace? Don’t you think that you ought to remain home and do your peace work at home?” That’s a good question. How long should a man pipe and you not dance? How long must a man mourn and you not lament? Your days of hearing good words from bold leaders are over.

We have a global assignment. Africa is ours, Australia, New Zealand, the Isles of the Pacific. No part of the Earth should you feel estranged from, in order to claim any part of the Earth in the future. No matter what your color or your race, you will have to claim the earth that was created by Allah (God) for the righteous.

The Thinking of Bush

I do, by the Grace of Allah (God), think that I understand what is in the mind of our President (Bush). His desire is to make war on two fronts. He must defeat Baghdad, Iraq, but he also must not allow Islam to thrive in America or anywhere else in the world. The wicked want to make Islam a religion of war, a religion of death, a religion of fanaticism. The Christian leaders are now boldly condemning Islam and the God of Islam. They are spending millions of dollars training a cadre of missionaries with a goal to wipe out Islam. They fear Islam in America, that it might change the religion of the people.

You say, “I am a Christian.” I ask, what is that? You say, “I am a follower of Jesus.” I ask, what was his religion? You cannot show me in Matthew, Mark, Luke or John where Jesus said, “I am a Christian.” You cannot show me where Abraham, Noah, Lot, Jonah, Isaiah, Ezekiel said, “I am a Jew.” It’s not in the Book. I’m not saying it’s a bad name. I’m just saying that we should not kill each other over a name that the Master never used.

What is the symbol of your religion? You say, “My symbol is the cross.” What was the symbol during the time of Jesus? The symbol in the time of the Master was a fish. Why a fish? It is because your work is to be fishers of men and women. You are never supposed to come to the house of Jesus alone.

Who did you bring? Who did you catch today? Where was your fishing pole, and the best ones of you, where was your net? The people are out there swimming in the sea of sin. Who will fish them out? That’s why Jesus said to Peter, “Follow me, I’ll make you a fisher of men.” If the first disciple was a fisher of men, what are you? We are praising Jesus with our lips, but the heart is far removed.

Muslims, you are no different. All of this hypocrisy in religion has to end. It’s good for us to build marvelous buildings and every great preacher wants to build a nice house, but Jesus never built one. I read in the Book that they saw him teaching by the river Galilee. I read where the Master was teaching by the side of the road, because the church is not a building. The church is you. Building the church is building the character of God formed in you, then Allah (God) walks when you walk; Allah (God) talks when you talk; Allah (God) acts as you act. You become the Church of God in Christ.

Muslim? What is that? Is it a fez? Is it a beard? Is it a camel? Is it saying “Al-hamdu-lilah!” (All Praise is due to God.) What is a Muslim? A Muslim is one who submits his will entirely to do the Will of Allah (God). Never let names divide the House of God anymore. If one says, I’m a Christian; if one says, I’m a Jew; if one says I’m a Muslim, stop and watch how they live. That will tell you who they really are.

If Allah (God) is not king in your dome (head), then you do not know the awesome power of the Ruler, because when Allah (God) rules in your house, you do not fear men, you do not look at the power of the great military strength of America and bow down. If The King is on the throne in your dome, you know that He is Omnipotent and gives you power, through your faith, to change the realities of your life.

(The government and media) are after me and I have seen the trickle of propaganda already started. When I go (on the peace mission), Allah (God) Willing, I will visit countries and speak to leaders that (President Bush) calls the “axis of evil.” The spin doctors will spin their yarn to weave a jacket for me and for us, saying that we are terrorist sympathizers or terrorists ourselves. Many leaders will be threatened that you will lose what they think they have. And the trade-off will be, join the government against a voice of truth that you know has never been a terrorist. I have never asked anyone to harm the hair of the head of any man.

If I were you, I would throw the rider off and seek refuge in Allah (God).