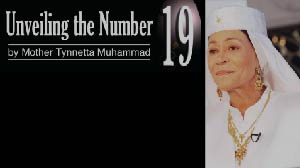 “Then after them We sent Moses and Aaron to Pharaoh and his chiefs with Our signs, but they were arrogant, and they were a guilty people. So when the truth came to them from Us, they said: This is surely clear enchantment! Moses said: Say you (this) of the truth when it has come to you? It is enchantment? And the enchanters never succeed. They said: Hast thou come to us to turn us away from that which we found our fathers following, and (that) greatness in the land may be for you two? And we are not going to believe in you.” –Holy Qur’an, Surah 10, verses 75-78

As we move forward into the new transition of the United States governmental administration and the executive office of the president, the newly-inaugurated President-Elect Barack Obama will reside as America’s 44th president. Prophetically speaking, the 20th of January is the exact day of the publication of our newspaper, The Final Call. This date marks exactly 16 days following our sighting of an unusual star-like object in the Port of Veracruz as we approached the shoreline of the Gulf of Mexico in the evening at sunset.

You may recall from our last article that a small group of 10 persons coming from diverse cities, Detroit, Michigan; Columbus, Ohio; Fort Lauderdale, Florida; Phoenix, Arizona; Poloma, California; Chicago, Illinois and Cuernavaca, Mexico, were gathered in these first days of the new year. We had traveled to join our dispersed family members of the Black Diaspora in the town of Yanga, also named, San Lorenzo de los Negros, dedicated to the first Black liberator from slavery 400 years ago in the state of Veracruz.

We were accompanied by the imminent professor, Toni-Mokjaetji Humber, Ph.D., who has conducted important, scholarly research on the subject of the Black presence in Mexico. We participated with the citizens of Yanga and nearby villages this 400th anniversary of the struggle of Yanga and his companions to break the chains of slavery to become free men in the Americas. Through the celebration of art, music and dance, stories and performances, speeches and poetry, and songs they were all dedicated to Yanga, the first Black liberator in the Americas. We were gathered for the official opening at the Regional Museum of Palmillas for all of the ceremonies. The following day we found in the daily newspaper an article that acknowledged our presence at this gathering and the song that Dr. Humber had written dedicated to the history of Yanga.

Following that evening’s presentations on the 4th of January, we traveled for an hour and a half to the nearby Port of Veracruz to witness the large gathering of ethnically rich celebrations and performances in the central plaza and along the coastline of the Port of Veracruz where Blacks of African descent mixed with the Native Mexican and Spaniards creating new races of mixed blood in this part of Mexico. The story and history of Yanga being celebrated at this 400th Anniversary in Mexico, a man who was captured in and enslaved in Africa comes within 16 days of the present inaugural celebration of the First Black President in America, Barack Obama. As the 44th President of the United States, he is resonating the atonement message which is reconciliation and responsibility to the atonement frequency of 440 vibrations per second. This frequency connects us to the historical Million Man March in 1995 held on the Capitol steps of Washington, D.C., where the Honorable Minister Louis Farrakhan delivered the atonement address of Redemption, Reconciliation and Responsibility to approximately two million men on the Washington Mall. This event has left its indelible mark on the history of this American nation and cannot and should not be ignored as a turning point in relationships of the ex-slaves’ population to the powers that be.

“And Pharaoh said: Bring to me every skillful enchanter. So when the enchanters came, Moses said to them: Cast what you are going to cast. So when they had cast down, Moses said: What you have brought is deception. Surely Allah will make it naught. Surely Allah allows not the work of mischief-makers to thrive. And Allah will establish the truth by His words, though the guilty be a verse.” –Holy Qur’an, Surah 10, verses 79-82