When the Honorable Elijah Muhammad stopped speaking, Minister Farrakhan asked him the question of repentance. That was to have very significant meaning to him and to all of those that were present in that meeting.

The Honorable Elijah Muhammad’s response to him was: “Oh yes brother, repentance is accepted, but if the accusation was open then, the repentance must be open and it must be in time.”

This tells us what kind of heart Minister Farrakhan has, to do this good work on a people (us) without compassion for other persons that they had done evil to; for this sinner, who has done something very vicious and evil on another that has not yet even repented. 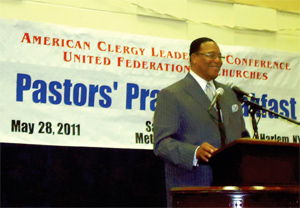 That situation involves the future, which is now. I’ve written a book that involves that problem. I know many hate it. They have proved this because they have destroyed it and the people are still envious. Can “we” get out of this 100 percent? Yes—but it must be in time!

What does this mean that we are living in this situation, now? What does “repentance” mean?

What does this mean in the Bible and/or the Holy Qur’an?

Have you studied envy and jealousy? If you done this, what caused you to study this and whom and why? 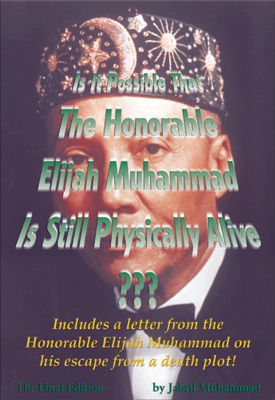 What was/is your reaction, to the words and the letter written by the Honorable Elijah Muhammad? Answer not to me, but to yourself—what was your first reaction and what is your reaction now?

On the morning of June 17, 2002 I received a phone call from Sister Andrea Muhammad of Muhammad Mosque #12, Philadelphia, Pennsylvania to the effect that she received a letter from Minister Rodney Muhammad (of that same Mosque) for me.

It was the letter I referred to on page 114 of the eighth chapter of this book that was written to me by the Honorable Elijah Muhammad in November 1966.

I had it when I published this book in 1983 and in 1990. It did not occur to me to mention nor include it in those printings.

However, I did not have this letter at the time this book was published in 2001. If I did I would have published it in that printing which was about double the size of the previous two.

If you notice, I did not mention, in that chapter, whether or not this letter came up in what he told me of his future escape from a death plot. The letter was not on my mind at the time of our discussion, which developed, for me, quite unexpectedly.

Nevertheless, I was and am grateful to Allah and to him for what he did tell me.

I am very thankful to Allah for blessing me that day with that letter. I hope you share this gratitude. And, perhaps this letter will stimulate deeper thought over the future of the Honorable Minister Louis Farrakhan.

On June 5, 2006 I interviewed the Honorable Minister Louis Farrakhan on a number of topics. One of them was what he thought about my idea of placing the letter that the Honorable Elijah Muhammad sent to me back in November 1966, in this book. Here was his response.

“There is no witness stronger than his own witness of what he knew would come to him, except Allah. He told you in the letter that he would escape a death plot. He gave several instances of scripture that confirmed that.

“Well here’s a letter that he wrote at such and such a time in a certain context. And he bears witness that he would be taken on the heel of a death plot. Then, in connection with this death plot, the Honorable Elijah Muhammad told you that, ‘If Allah had not shown me how I was going to escape, I would have no hope.’ ”

The Meaning of This Cover

The cover of this book has meaning. The photo of the Honorable Elijah Muhammad I selected for this cover suggests (to me) the profoundly deep side of his being that could, and can only be accessed by the spirit and permission of Allah.

So, when I wrote the letter that forms the heart of this book in December 1975, the Honorable Elijah Muhammad was, to most, a fading memory.

Since 1977, the Honorable Minister Louis Farrakhan has and is yet changing the thinking of the world about his teacher.

These two facts account for my placing this photograph of the Honorable Elijah Muhammad, on this book’s cover, in what is called in the printing industry “ghost” and then elsewhere in its original color and sharpness.

He wanted for others that which he had of good for himself. After much difficulty, it was published the following year. In fact, this book has had a very controversial and difficult history.

I’ve placed the title in green as this represents the profound nature of the truth it suggests and the wise reasons for which Minister Farrakhan wanted others to read it.

The photos of Minister Farrakhan that I’ve selected for this book, are intended to suggest that the process of the changes, I’ve indicated above, are taking place.

May Allah bless each reader of this little book to think more deeply than ever over the answer to the questions it raises to which I’ve placed three question marks, which indicated “trial.” Thank you for reading this.