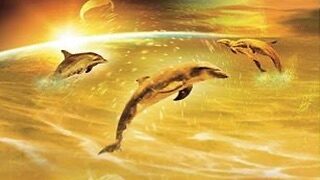 “Remember The Magic Of The Golden Dolphin”

If dolphins are the bridge to the Sirian star system, then the Golden Dolphin is the Sirian Solar intelligence representing the Supreme Light of the incoming Golden Age. The Golden dolphin is helping to recode the planetary frequencies by channeling in the new vibrational frequency of the New Beam.

This new galactic beam is moderated through the Sun. The information can only be received through telepathic attunement. The Galactic Maya knew that what we call the telepathic function of the human brain is actually activated by frequencies from the Sun.

Dolphins and whales are the transmitters of the New Beam which carries with it the traits of peace, love, synchronicity, and unity consciousness. Dolphins work through the frequency of joy, play and sound vibration.The 13 Moon/28-day synchronometer and synchronic order is a Sirian system based on starting date July 26 in accordance of the heliacal rising of Sirius.

The dolphins are holding and transmitting these frequencies of harmony and radial consciousness. Science has discovered that the dolphins measure “time” with 13 sets of 28 grooves along their teeth, which are further arranged in a configuration that functions as an antenna for sound and communication.
Perhaps the Golden Dolphins are the keepers of the lost chord, the New sound vibration that is being vibrated to our planet and rearranging the molecular structure. This sound vibration is also the etheric grid that connects all the pyramids.