I am updating this article with changes that I wrote in 2005 and was made public through The Final Call Newspaper. I’ll explain why, next issue, Allah Willing.

On July 4, 1930, on a Friday, in Detroit, Michigan, a Black man Who was so fair-skinned, He easily passed as a Caucasian, began knocking on doors of Black people living in an impoverished section of that city.

Fourteen months later, a Black man whose first name was Elijah, who was living in that city, recognized the above Black man, on first sight. 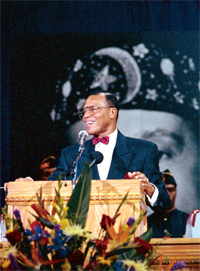 Later on the Honorable Elijah Muhammad made public his experience. What was that experience? Why am I raising that question in this article now?

Parenthetically, in 1961, I was invited to the University of California in Berkeley, to address an audience of students taught by a very intelligent Caucasian professor who told me, and later his class, that he observed a man knocking on doors of Blacks in poor neighborhoods in 1930 or so.

He said he was doing research. He said he later concluded this man was Master Fard Muhammad from the Teachings of the Honorable Elijah Muhammad.

What is the meaning of research? According to one dictionary research means this: “the systematic investigation into and study of materials and sources in order to establish facts and reach new conclusions.”

Concluded means, “arrive at a judgment or opinion by reasoning.”

Does this involve truth? How much?

There’s more but use your dictionary. But this involves the Holy Qur’an and the Bible.

The Bible has something to say of this plane appearing in the skies, on the 4th of July, “in the 30th year.” Ezekiel opens with a prophecy of this terrifying plane. In Ezekiel, verse one, we read: “Now it came to pass in the thirtieth year, in the fourth month, in the fifth day of the month, as I was among the captives by the river of Chebar, that the heavens were opened, and I saw visions of God.”

The Messiah taught that these words refer to events of the 4th (and the immediate afterwards) in July 1930. The “fifth day” in the East, where this was written, is the fourth here in the West. Ezekiel was a type of, at least, a man and a servant of his today. He foresaw them among “the captives” who were a sign of Black people here in America today.

The wheel-like plane is described in symbolic terms in this chapter and also in the 10th chapter of this book.

The Messiah has taught much of this huge plane, which is the physical fulfillment of several prophecies of it, in Ezekiel and throughout the Bible. This wheel-like plane is the location from which the Honorable Elijah Muhammad spoke to Minister Farrakhan on September 17, 1985. The press inadvertently bore witness to this 20 months later.

The Honorable Elijah Muhammad taught that it’s an enormous wheel-like plane in shape. This is also what Minister Farrakhan reported from his more-than-a-vision.

It has the ability to fly at great speeds. The Honorable Elijah Muhammad told Minister Allah and me, in May 1960, that the previous night he clocked it at 25,000 miles per hour.

There are others who doubt this plane’s reality. They’re in denial. This leads to a delusional state of mind. However, there are just too many who have either seen the Mother Plane or, more likely, one or more of her 1,500 “baby” planes.

The overall evidence is overwhelming that this Plane is powered by highly wise, powerful beings. This plane is commanded by, the Supreme Being, Master Fard Muhammad, explained the Messiah, the Honorable Elijah Muhammad. Both of them back Minister Farrakhan!

They feel compelled to keep their mouths closed on this subject because they don’t believe they can handle the reaction of the public. In fact, the truth of the Mother Plane is what they called “Above Top Secret.” It’s too late. It’s out.

If the rulers of America don’t do the miraculous, like sitting down with Minister Farrakhan, they will definitely go the way of Biblical Egypt, Babylon and others like them.

Sit down with the modern Aaron, and his backer, the modern Moses before you drown.

Don’t react publicly if you don’t know. Ignorant and some intelligent people speak what they think they know, but don’t know. This involves the Bible.

There are Caucasians who are knowledgeable of this Plane and its 1,500 “baby” planes and their relationship to the true problems of America. It’s written that certain wise Caucasians will do an intelligent thing.

I watched Senator John Kerry (via C-Span) express how shocked he was over the horrible photos of lynched and burned Black men and a few Black women in the book “Without Sanctuary: Lynching Photography in America.”

That book was the catalyst that sparked Senator Mary Landrieu (D-La.) to co-sponsor a resolution for the Senate to make a very specific apology “for a very specific failure” on its part, relative to an aspect of the 400 years plus, of abuse that was prophesied in the 15th Chapter of Genesis that we’ve lived through.

If Senator Kerry has been sincerely shocked into reality and really desires to become as educated, as his words implied, of the real history of Black people in America and Black life in the present, then he’ll see Minister Farrakhan clearer and become grateful for him and act accordingly.

So would the few other Senators and the more learned Caucasians of this land who express those and deeper sentiments.

It’s in their self-interests.

How does this relate to the “stone of stumbling and the rock of offence,” in the Bible?