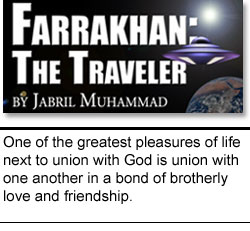 When I saw the article, which appeared in the last issue of The Final Call, by the Honorable Minister Louis Farrakhan, under the title A True Friend, it made me smile. It gave me satisfaction. A little over a week ago, (today is October 22), I was searching for this two-part series, which Minister Farrakhan wrote fourteen years ago. They appeared in The Final Call Volume 8, Number 4, January 15, 1989 and Part Two was Volume 8, Number 5; February 10, 1989. I have them in an unpublished manuscript. It occurred to me to include excerpts of his articles in a few upcoming articles to make a series of important points about Minister Farrakhan—in order to go deeper into what I have been writing over the past few months.

I’m working on the roots of the development of our talents and the fact or reality that it today occurs as we are resurrected from our graves of spiritual death. This is something that has never happened in the history of humanity.

A day or so later, (October 9) my son, Barnar contacted me for part one of that two-part series. Although he did not say it, I guessed it was for this great newspaper or for the online version. That same day, I was contacted to write on the influence of the Honorable Elijah Muhammad on Black America for the very next issue of The Final Call.

This is a huge subject.

If you have not obtained them, or if you have never seen a video of or heard an audio of the Saviours’ Day speeches delivered by the Honorable Minister Louis Farrakhan in February 1981, 1982, 1983 and 1984, get and study them! These are among the profound speeches he made that contain much of the roots and the explanation of the overwhelming influence of the Honorable Elijah Muhammad.

If you don’t study what he has taught, (which were history-making and an essential part of our history), others will. And they will accomplish what you should have accomplished for others, who will then have to do (and be rewarded for doing) that which you ignored or abandoned—because you decided it was not important enough to study God’s word through our Brother, Minister Farrakhan.

Get your detailed and truthful resumes to Minister Farrakhan, who is about the business of Nation-building. Stop procrastinating.

To ignore true history and true religion is to continue in the position to be taken advantage of by those the Honorable Elijah Muhammad called those “smart, crooked deceivers who will always try to put one over.” Should we by now be tired of all forms of slavery?

Carefully consider this. The Honorable Elijah Muhammad wrote: “You, Black brother, are better off. You have all the scriptures that were given to prophets throughout the whole six thousand years of the white man on the planet earth. And then you will be so foolish as to delay in making a good decision until you see something happen and as the Holy Qur’an and Bible teaches us, or until you see the angels coming in the clouds of heaven before you make up your mind. But still, probably, you would reject that. But as the Holy Qur’an teaches you, it will not be a good day for you who have waited for such time. (Emphasis mine)

“When the angels come in the clouds of heaven they will not be coming to do anything like preaching or giving you further knowledge. It is prophesied that on the Day of Judgment the angels will come to execute judgment on you for not believing and to save those who do believe.

“‘The Day of Decision’ only means the resurrection and judgment of the present world. As Jesus prophesied, as it was in the days of Noah, Abraham, and Lot, so it will be today. They were eating and drinking having a “good time” as they called it; but it is not a ‘good time’; it is a wicked time.

“The history teaches us that, by waiting, they were the losers; but yet, it will be the same today. It is the same, for it is going on now. You are rejecting this truth and you are accepting falsehood instead.”

The scriptures, seen in the light of what Allah revealed to Minister Farrakhan’s teacher, of whom the Minister is the chief exponent, clarifies and makes understandable even that which troubles us on a daily basis. So, benefit self by reading the scriptures in the light of this truth before it’s too late.

“The Honorable Elijah Muhammad was indeed a friend of the Black man and woman. He worked, suffered, studied and constantly prayed for our rise. … But what has been your response to such a friend? The response of many who knew him has been to use his knowledge, but to deny him.

“BEHOLD, HOW GOOD AND HOW PLEASANT IT IS FOR BRETHREN TO DWELL TOGETHER IN UNITY!

“It is written in the Psalms of David, ‘Behold, how good and how pleasant it is for brethren to dwell together in unity.’ Psalms 133:1. Allah (God) is teaching us through this scripture that one of the greatest pleasures of life next to union with God is union with one another in a bond of brotherly love and friendship.

“The Honorable Elijah Muhammad was indeed a friend of the Black man and woman. He worked, suffered, studied and constantly prayed for our rise. He sacrificed His own personal life to devote 44 years to the rise of our people.

“He, single-handedly, with tenaciousness of will and singleness of purpose, turned the language of America from use of the word ‘Negro,’ which means something dead, lifeless or hard, into seeing ourselves as Black people, members of the aboriginal nation of the Earth.

“He turned our hearts toward Africa and our Brothers and Sisters in the isles of the Pacific, Central and South America and the Caribbean.

“His Wisdom showed us the connection between the Native Americans and their membership in the aboriginal nation of the Earth. He, more than any religious leader, is responsible for causing us to refer to one another as brothers and sisters.”