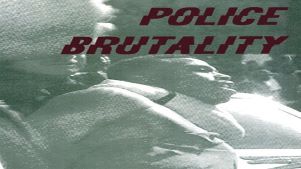 I want you to know that this act of going out attacking our Mosque in Los Angeles was not the first time. In 1962, the police department, under the guidance of that evil Parker and the Mayor of the city of Los Angeles, sent an army of policemen against our Mosque to shoot it up and to kill Negroes who claimed or who thought they were Muslims. They came upon us like swarms of wild beasts from the jungle, and
ran in our Mosque shooting down every unarmed Muslim that they met with, killing them and wounding them for life. One of them today is paralyzed forever, and rolling himself up and down Los Angeles’ streets in a rolling chair and in an automobile that I bought for him that just fits his condition.

[This was a] sign of actually what the Los Angeles Police Department wanted to do to us, and what they followed up with after we had come through the worst and greatest part of the attack out there on the other darker people of ours brothers and sisters. We stood neutral and took no part either way, but they were not satisfied with our peaceful stand. I knew that this was only a trial for them to show my people that they care nothing about humbling yourselves to them or trying to be neutral making no attack. This was a good example for you to see that these brute forces care nothing about your being neutral, cares nothing about your trying to be humble in their midst, cares nothing about your being innocent. He doesn’t care anything about the innocent, no more than he cares for the guilty. His only evil intention is to get rid of the Negro in any way that he possibly can, especially [to the extent of] death.

They attacked our temple there and shot it up and claimed that someone shot at them from the Mosque, but never actually produced the person or a gun. They found no gun in the Mosque. This is the proof that we do not resort to carnal weapons. They didn’t like leaving us there without doing some harm or killing some of us; whether we were doing anything harmful or not. This is all false that we shot at them. They know it is false. They can’t prove their falsehood. They then hauled 52 of my followers and put them in jail; for what? Did fifty two people shoot at them? No! This is all they wanted to do, claiming that they had now brought the city into calm and into peace. The National Guard and the
Police of Los Angeles just couldn’t leave the Muslims there without starting something with them, or trying to kill them. They tried to provoke us and could not, so they just shot up their own brother’s building. We didn’t own the building, or we don’t own the building, but were trying to buy it and they poured five hundred bullet, they said, through it, and then made mock of it that they shot it up and it looked like Swiss Cheese. This is to tell you and me how happy they are to do evil to the black man. How happy they are to try and get rid of the Muslims.

I say to America, this is a step to her doom. I say to America that from the government in Washington, all the way to the courts or either way you may take it, wherever the power of the United States is at or exercised, they want to kill the Muslims. They want to get rid of us, but I say killing the Muslims in America is only inviting your near doom. It’s only inviting it. We have the power of heaven and earth on our side. This is only an offer to get you into plenty of trouble. We don’t care what you want to do for us, but we will make a stand for ourselves. [We are] inviting our brothers throughout America, whether you believe in Islam or not, to join in with us and let us take a stand for ourselves. There is no justice for us. There is no help for us in this nation.

We must remember that we must try now to defend ourselves against a free loose army, roaming the highways and the streets of the cities and towns of America to kill us.

As Salaam Alaikum
Elijah Muhammad,
Messenger of Allah To You All