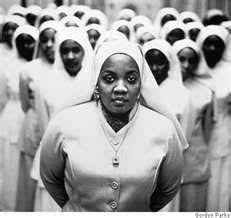 Reprinted from page 18 of the June 9, 1972 edition of Muhammad Speaks Newspaper

I HAVE been a professional secretary for over 10 years on the West Coast, in the South and on the East Coast. I have been employed by businesses that were owned by the devil (Caucasian white man), and by Originals (Black man).

I have also worked while in high school and college in several other capacities such as small cafeteria’s small taverns, the big night club, baby-sitting and also on the farm. I have, in other words, met all kinds of people, from the Christian’s most elite, to the Christian’s most illiterate.

Black sisters, I fear no one but Allah and His Messenger! I have been hired on permanent basis on three devil’s jobs, and have worked temporarily in and from temporary agencies since becoming a Muslim, and I was never fired from a position.

The devil never disrespected me, nor did he ever do anything to show disrespect to our Leader Messenger Muhammad in my presence, nor did any other race of people, including Blacks who were not Muslims.

I was not shunned by anyone on these jobs, nor did I ever see any expressions that would cause me to think that someone had been discussing me in a derogatory manner.

The reasons I was so successful on these jobs were because:

1. I applied for the jobs as a follower of Messenger Muhammad.

2. I dressed in accordance with the Messenger’s instructions

3. I conducted myself in a business manner but with cautious pleasantness.

4. I never encouraged small talk conversations or became interested in gossip and was spared of them.

5. I gave full-time and satisfactory work.

I did these things because of facts presenting themselves daily which are: Allah is God, Muhammad is His Messenger, The whiteman is the devil and his time of rule is over, and the Original man is the Black man.

You need a teacher to teach you and only the Honorable Elijah Muhammad, Messenger of Allah, has

the Divine instructions to teach the Black woman in America how to become civilized and respected. Come to Muhammad’s Temple, and accept and follow the Greatest Man you know as your teacher.