If you read this newspaper, The Final Call, in your city, you can see the Honorable Minister Louis Farrakhan’s position in the Bible and in the Holy Qur’an. 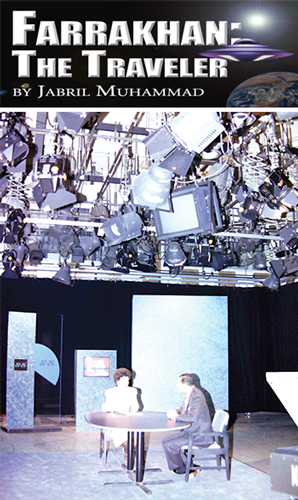 Some know we are in what is called “the end of time.”

It was on a Friday night, in October 1959, when I was in the process of leaving my apartment to go to Muhammad Temple #26 (which it was called at that time) in Oakland. At that time, I was living in San Francisco.

I read a few words from the Bible, just before I left to go to the meeting that shocked me.

I returned to my apartment and I prayed for understanding of my reaction to what I read in the scriptures. I did not tell exactly what I saw. I saw that the Honorable Elijah Muhammad would leave the USA to meet in person Master Fard Muhammad. It took many hours for me to get to sleep that night.

I had a subject to share with the believers and others who was there, from the wisdom of the Honorable Elijah Muhammad. When I opened the Bible, I saw some words that stunned me. But I did not go deep into it.

Now it is February 1960, Saviours’ Day. I wanted to see two Brothers, privately, but could not meet with them privately.

One Brother was Malcolm X’s blood Brother, Brother Philbert who is now deceased. The other Brother was the Honorable Minister Louis Farrakhan who is known worldwide all over the planet. I could not meet with them privately, to share with them what I saw.

A believer told me that some people come into the Nation of Islam for different reasons. Some don’t really want to sacrifice to uplift the Black man and woman, but to seek so-called fame and fortune for themselves.

That believer also told me, they want to have the fame and popularity of the Honorable Minister Louis Farrakhan and when that does not come to them, they begin to create problems and do devilishment.

This is something to ponder: A man who is the direct work of God, to serve His highest purposes!

The Honorable Elijah Muhammad repeated that which he said on an earlier occasion that Minister Farrakhan was the answer to his prayer for a helper from his family.

Not long afterward he used the same words that you can find in Chapter 7, verse 142, of the Holy Qur’an, that Moses used in speaking to Aaron before he left the physical presence of the people.

The words that the Honorable Elijah Muhammad used to Minister Farrakhan, “take my place among my people.” This is exactly what Moses told Aaron before he went to his Lord.

I’ve written the above words here. Some see this from good motives. Others see from bad motives. This makes for division.

I wrote the following words in a book: “Several years ago, I took the time to study exactly what the words ‘thank you’ meant. In short, this expression means to express and show gratitude for a divine favor. And so, I thank each of you, who in any way, large or small, who helped me to help the Honorable Minister Louis Farrakhan get his words published in this book (Closing The Gap.)

“I thank all of you, in advance, who now know of this book and who will spread the news of its existence to others.

Right after that book, I published another book, which is titled: Is It Possible That The Honorable Elijah Muhammad Is Still Physically Alive???  Right after that, I ended up, all but dead—several times. I won’t go into this, but… .

I know most don’t know, but I know some people have in their minds to change and/or use the Closing The Gap book for their own purpose. Most don’t know what Dr. Patina Muhammad went through to save my life as I was working on both books. This also involves other books that Allah blessed me to write and publish that are now ‘out of print’.

Is this important? Why?

There are two significant additions to this edition of this book Is It Possible That The Honorable Elijah Muhammad Is Still Physically Alive???  Many don’t know the history of it.

The first is a letter written by the Honorable Elijah Muhammad to me in 1966. In it he expressed his conviction, that by divine help, he would escape a particular death plot that he would one day face.

In a previous edition of this book, published in 2001, I made reference to this letter in the last chapter of this book. I did not have the letter then. However, on June 27, 2002, I was very surprised and very happy to receive a phone call that a copy of that letter was to be faxed to me later that day.

That letter is now contained in this book.

This edition also contains a statement by the Honorable Minister Louis Farrakhan expressing his view of this letter’s value. He made it on June 5, 2006 while answering questions from me for Closing The Gap.”

Brother Jabril: This statement covers a question that could come up in a conversation, no doubt it does come up in many households whether or not we are living through, or even in the book of Revelation?

Minister Farrakhan: Yes. We are living in the book of Revelation and we are moving quickly toward the end of that book. And this is why I tell the pastors that if you don’t preach to give the people understanding of the prophecies concerning this time, then the people would not know what to do to save themselves. And as the scripture says, “If it were not for His elects sake, that He shorten these days, no soul would make it through,” such a terrible time that we are now approaching or we are now in.

Brother Jabril: Next to the last question of this book is this: Brother Minister, what do you think about these questions that have been put before you by me over the last several years, and what have they allowed you to do?

Minister Farrakhan: Questions elicit answers. Answers to profound questions help people to see one: the mind of the questioner and the mind of the one being questioned. It helps the reader to see whether God is present with the answer that is being given.

Since you don’t prompt me that I could go home and think about an answer, but as I said to you in one of your questions to me, as you raise the question, the answer starts forming in my head.

Now either I am a voice of God, for our people and humanity, or I am not. I hate arrogant speech where people declare things of themselves that may or may not be true. I am frightened of declaring something that speaks to ego rather than to the wisdom and the will of God.

So I try my best as he told me, not to worry about where I am in the scriptures, but to make his great commission known and he would represent me to the people.

These questions that you ask of me cause me to represent him; make his commission known and in so doing, he’s representing me to those who would read such answers.

I think I have been enlightened by the questions, because many of them I never had a thought on before. And it goes to show that what God has put within it takes a stimulus of some kind to bring it out.

The Honorable Elijah Muhammad wrote, “It is one thing to know that iron ore is in the earth. It is another thing entirely to mine it out of the earth and put it into the service of others.”

I don’t know all that God and His Servant, the Honorable Elijah Muhammad have put within me in preparing me to sit in his seat as the father over the house in his absence.

So your questions of me bring out what is within that it may be put into the service of others.

Now, as I wrote the above, I hope you will study Minister Farrakhan’s words very carefully.