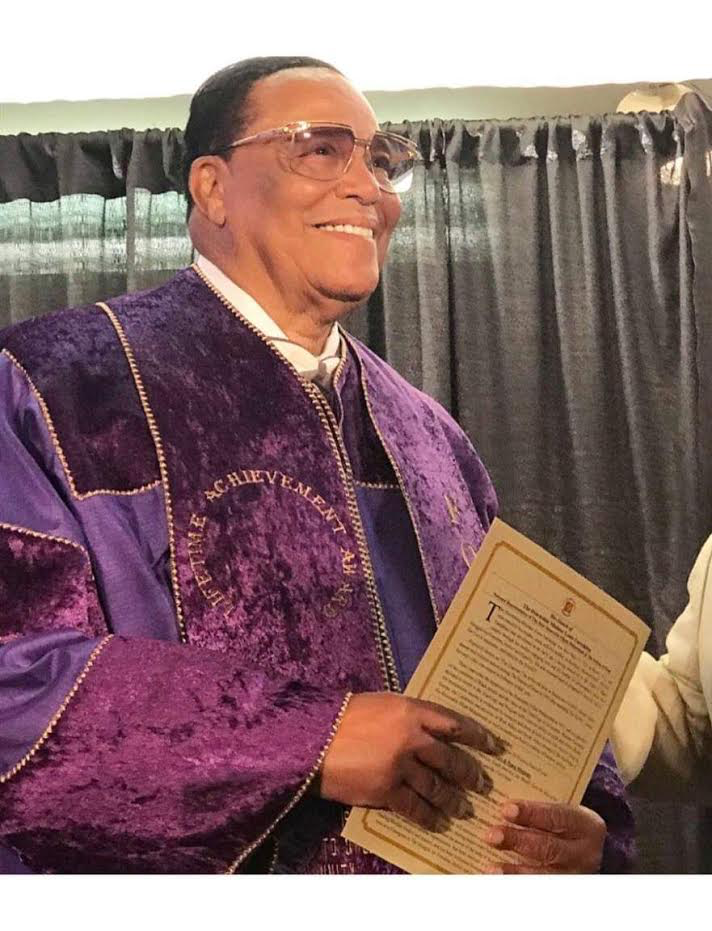 (Editor’s note: The following are excerpts from a question and answer session held by the Honorable Minister Louis Farrakhan with the Sudan Media January 17, 1998 in Khartoum, Sudan during his third World Friendship Tour. Unfortunately, the questions posed by the media were not audibly recorded, however, we have reprinted the answers offered by Minister Farrakhan as they contain valuable guidance to the way to peace and unity.)

We are on a 53-nation tour and the Sudan was Nation No. 19. The theme of our tour is “Peace, Reconciliation and Atonement.” We know that the Sudan is surrounded by neighbors that need reconciliation. We need peace and stability, so that the country can continue on its path of development.

We hope and pray that Allah (God) would bless the Sudanese people with peace and bless us with reconciliation with our neighbors. We pray that the government of the United States will be a partner in that peace, rather than an enemy of that peace.

I was especially pleased to be at the mosque during Salat Al-Jumu’ah, but the highlight of my trip was being with the young people this morning, to meet the young girls and boys, the soldiers of Allah (God), to see their songs and dance, and feel their spirit.

Many young people have been martyred, fighting for the cause of Islam and fighting to preserve the freedom of Sudan. We pray that we will not have to lose many more lives, precious lives, whose destiny should be to build Sudan and Africa for the next century. However, all life supports the principles of Freedom, Justice and Equality, and when these principles are violated, it is incumbent upon us to give our lives for these principles, that these principles may be established.

Now, my dear Brothers and Sisters, I will take a few questions.

It would be my great pleasure to say to President Bill Clinton—and probably I am saying to him now, through this media—that rather than America being a mischief-maker on the borders of Sudan; rather than America, through the Secretary of State, Madeline Albright, inviting the Ugandans to spend their precious life blood to destroy the regime in Khartoum; rather than America sending millions of dollars in arms to the neighbors of the Sudan to pursue war against the Sudan, it should be that America should be a genuine partner for peace. For if there are problems between these nations, these nations—without interference—can solve their problems.

Prophet Muhammad, (Peace be upon him), said that, “An individual has really not attained to righteousness or become a Muslim, until he wants for his brother what he, indeed, wants for himself.” I would ask President Clinton, “If we, in the Sudan, did not like his regime or governance of the United States of America, would he like it if we sent weapons to Mexico and Canada and sent the Foreign Minister of Sudan to Ottawa to say to the Canadian people, ‘We will back you in your desire to destroy the regime in Washington, D.C.’? How would America like that?” I’m sure America would be extremely angry at such. Then, she should follow the Christian Golden Rule: Do unto others as you would have others do unto you.

The spiritual fruits of the Million Man March represent a transformation in the lives of Black men to become more responsible husbands, fathers and providers for their families. Mentoring programs and business efforts are going on throughout the United States of America. According to what the United States and government agencies have told us, 1.7 million Black males voted in the last presidential election, and this increase was directly attributed to the Million Man March. The crime rate in all of the major cities of America has gone down. The murder rate has gone down, directly attributed to the transformation that took place during the Million Man March.

Every Black organization in America had an influx of new members, and even churches and mosques were reporting new male membership. We, in the Nation, especially grew as a result of the Million Man March. Lastly, we believe that we are, potentially, the moral balance for the arrogance of power in the United States. The stronger we get, the more we can help give direction to that nation, with regard to her foreign policy objectives. The stronger we get in America, the stronger and the freer our Brothers and Sisters in Africa will be.

Let me state, for the record, that when a legally registered political party in Algeria participated in an election, and it was determined that that party, which was legal, was about to become the party of power in Algeria, and that election was annulled, there was no outcry from the so-called democracies of the world—namely England, America and France—against the annulling of that election. Because America, England and France were silent, I believe that the Muslims have no wind in killing their own people who voted for them. This is a wicked machination of the enemies of Islam, to slaughter people and then the government would make a statement that it is “Islamic fundamentalists.” Why should the fundamentalists, who won an election, kill the people who would have elected them, destroying their own popularity with the people? Think!

This is a machination of Shaitan (Satan) and the whole world must condemn the slaughter of innocent people, either by the government in power or the military in power or Western intervention with money, using money to make people look like they’re Muslims and ordering and paying them to slaughter innocent people, in order to destroy the reputation of Islam in the world. No Muslim who loves Allah (God) and loves Islam would kill a woman and a child and innocent people, for what purpose? This is not Islam. Muslims are not doing this. Wicked people are doing this, trying to give Islam a bad name.

While I stand here in the Sudan, there is a war going on, and that war is against Islam; and it is headed by the government of the United States of America and the powers of the West. They know that only the unity of Islam will prevent Western hegemony over the world. There is no other force in existence to stop that, but Islam.

Although I have access to the media, the media in the United States is managed very well. If the truth that I speak will excite the thinking of the American people, then the media will show me on television, but there will be a voiceover and they will never broadcast my words. They did this in Baghdad, Palestine, Egypt and other places. So, I expect that my words here in the Sudan may not get through to America except to those in power who will try to make it difficult for my words to reach the public.