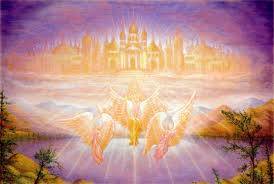 I, wanted to learn the Mystery of this language and become capable of communing with the Hidden Civilization of our people in the recesses of the Himalayas and The Gobi Desert…..1 of the Kingdoms is known as Agartha….and another Kingdom is known as Shamballah……remember the 2 are not the same as Revealed to me by Master Fard Muhammad.…

Master Fard had told me in previous conversation via telepathy that I would be taught the Mystery Language of The Agarthians..and he stated that it wouldnt take very long for me to learn it……

I questioned Master Fard on the Prophecy of Lord Maitreya rising from his hidden Kingdom To slay all of the rebells of God as a result of them forcing there way into his hidden precincts.

that he will go into that at a later time…

I inquired of the Kaldrakhan( see alternative spellings for this name) The Black Rider of the Horse who lead the army out of Shamballah to destroy all rebells on the Earth…….

didnt reply to this question…..(at that time)

As my research continued on the subject….

I was later informed of how impassable it is to reach such places if THEY DONT DESIRE YOU TO COME THERE……..

I was given information of the Vast Army that guard its precincts….and this army is indestructible…..You just cant kill them…..The Material composition of this army is beyond the general level of understanding of the people…This Army Knows No Death….

The technology is beyond the people of the Surface World…Its like something you will find in a Star Trek movie…..but yet is very much REAL,REEL,…..

Imagine a place that is so well guarded that they can reside in the space before your eyes and yet it will appear to be nothing present……Imagine a Place that exist in the same space before your eyes but its localization  is changed due to raising the frequency of the city causing the city to exist in a different dimension in time but in the same place…..making it totally inaccessible to the VAIN SEEKERS OF SUCH A KINGDOM……

Now back to events of this night….

My wife came immediately out of her Slumber while I was taken from my experience…..before I could even open my mouth my wife said to me

“DID YOU HEAR THAT KNOCKING?”

I immediately Grabbed my phone which I keep on the floor by my bed and looked at the clock…it said exactly 3:28am……I was stunned because this was the normal time I use to get up and sing my heart out to Allah in prayer…..

Me and my wife could hear the multiple foot steps and back and forth movements through out our home in the area of what I have termed “THE GRAND LIBRARY” this library is in the room right above our bed room….

Again we both knew what was going on but said to ourselves let them do what they always do while we sleep……Afiya goes to sleep while I seek to reconnect my mind to the experience that I was having before this happened…….

Then again there goes another  4 knocks……..

So me and my wife said to each other they are telling us to get up….its time…..The Angels of Allah are here “again” visiting us in the Night …..

I said to my wife that I just went to bed at 12:30am and desire to just get the rest of my experiences and then a little rest……she said ok….So again we ignored their knocking and continued in the course of my wife sleeping and me gaining information……..

I was being shown  a particular Caucasian(whom I will not name at this time) who was taking a group of the children of the Church of Scientology and teaching them the teachings of Islam as taught by The Cosmic Christ Elijah Muhammad and The Great Arch Angel Michael (Louis Farrakhan)……but it was in a transposed form……(meaning the language was crafted for easy digestion into their mental systems) As I examined the Caucasians that was performing for the Nation to show off how their Newly founded discipline I was examining a few of the children on stage…..Some of them had tattoos on the head and on the Neck…..and as I saw this ,I was worried over the sincerity of the Caucasians who were performing for the Nation……..As I did this… Master Fard Muhammad and my wife…Materializes in the Experience..

Master Fard begins to question me on my worries of the children…..

I made my concerns known to him….

He replied and told me not to worry over that….dont worry about those little children tattoos……

I replied Yes Sir…..
(Master Fard and his Angels have the Power to project themselves to where you are in Vision,Dream or your current Astral location….His POWER KNOWS NO END AND REACHES ALL WHERE EVER YOU ARE)

As I watched this experience Again there goes the 4 Knocks getting me and my wife both up again saying ok,ok,ok……I said Afiya did you shake the bed this time…..So as I was becoming agitated (due to the fact that I was being shown something very important of the future happenings of the NOI) I started shaking the bed to see if my wife possibly was moving and caused the head board to tap the wall of the bed room 4 times……but as I violently shook the bed……NOTHING MOVED NOR HAPPENED……OUR BED IS A KING SIZE BED AND HEAVY….ITS THE NEWER BEDS WITH MEMORY FOAM AND HEAVY WOOD OAK LIKE FRAME….So there was no incidental movement producing the knocking…..

I said they are telling us again to get up its Time…….

(well some of you may ask …TIME FOR WHAT?)

Master Fard Muhammad and his Angels will telepathically commune with us in the we hrs of the morning…..Its easier for them to do so……Not that they cant do it at other times….but its easier for them to get to us(my wife and me) and “you” if you took the time to engage them……The Atmosphere isnt filled with the evil thought forms and vibrations of the people of this world at that time…..So it allows there thought impulses to be received with very little hindrance…..

Back to the experience….

As I wrestled with what I was being shown I said to Allah to just let me go back 1 more time to finish up……and So I did..I tried to project my mind back to future happenings of the NOI….but no……I wasnt permitted to see any further…….

I was placed in a setting where I was being INTRODUCED TO THE LANGUAGE OF THE AGARTHIANS…..ITS CALLED THE VATTANIAN LANGUAGE….

I again was drawn back to my body with 4 knocks…….but this time these knocks appeared to be coming from the ceiling area……

I questioned Master Fard Muhammad on why was I shown these symbols and were these symbols being projected from the Subconscious mind to the Conscious mind…he so no…not exactly…..He said brother….When 1 desires  a thing and studies a thing it creates a

he said do you understand brother!!!!