This article is reprinted from Volume 22, No. 36 of The Final Call 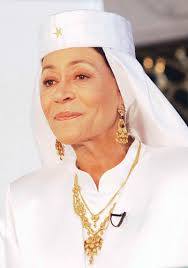 “Your Lord knows you best. He will have mercy on you, if He please, or He will chastise you, if He please. And We have not sent thee as being in charge of them. And thy Lord best knows those who are in the heavens and the earth. And certainly We made  some of the prophets to excel others, and to David We gave the Zabur.” —Holy Qur’an, Surah 17, verses 54- 55 According to the translation of the above verses of the Holy Qur’an as rendered by A. Yusuf Ali, these same verses refer to David as having received the (gift of) the Psalms. In his footnote 2241, he writes:

“The spiritual gifts with which the prophets came may themselves take different forms, according to the needs of the world and the times in which they lived, as judged by the Wisdom of God. A striking example given here is the gift of song and music as given to David, but it implies no superiority of David over others. David was given the Zabur, the Psalter or Psalms, intended to be sung for the worship of God and the celebration of God’s Praise.”

Zikre (The Remembrance of Allah) Ceremony recently held in Chicago under Shaikah Fareeha of the Jerrarhi Sufi Movement. At a certain point in the ceremony, God is praised with song, musical instruments and the dance of the whirling dervishes (photo below).

How do these above verses and commentary relate to the Revelation of the Holy Qur’an? A whole note of Music is divided into mathematical parts or notations; in other words, a sequence of numbers that double in vibration and pitch of sound. Letters are also described in the harmonics of music based on the English Alphabet, A B C D E F G.

Both numerically and alphabetically, the composition of musical notation is by numbers and letters, and then expressed into words and sounds in  musical transcription. The number indicated is seven. Seven initial letters of the Alphabet leave a remainder of 19 Letters. What might that have to do with the discovery of the Mathematical Code of 19 that is contained in the Revelation of the Qur’an itself? 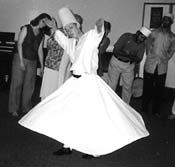 The mathematical division of a whole note of music also relates to the number seven. The following is the formula used with the summation of all its parts. One (1) equals 1/2; 1/4; 1/8; 1/16; 1/32; 1/64. When adding all of the denominators, the result is 126 plus the (1) factor equals 127. With further resolution, we get the number 19, which with further resolution, we get 10, and finally the Number One, which represents the Presence of the One God in every aspect of our Being.

We are the sounding board and a vibratory note of the One God in all its parts and diversities in the Oneness of Humanity. The Gift of song and music has been granted to the Honorable Minister Louis Farrakhan. This gift of music has been recently displayed publically beginning with his 60th birthday and strickingly again prior to his 70th birthday event. What correspondence might this have in relationship to David who was given the Psalms, a Revelation and a Scripture that was intended to be sung with chorus and musical instruments as part of the religious service? Is there something to be understood in this, in regard to the future? Does music play a factor in the Revelation of the Holy Qur’an, which many Islamic scholars have overlooked? How might all the above connect to the meaning behind the musical concert being planned in the State of Chiapas in Mexico? Why the controversy? Why have so many people been involved? Might this connect to the Honorable Elijah Muhammad’s words, that there is a missing note in Music? What is that missing note? Is it contained in the Missing Bismillah absent over Surah Nine? We will continue this discussion in the next article, God Willing!