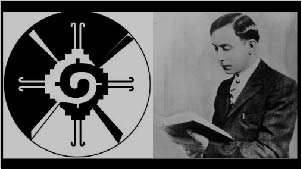 …Axis of the Universe….

Both Black and White…

Hunab Ku is the Mayan Term…( Hunab Ku is a Yucatec Maya word meaning “The Only God” ) with ‘Hunab’ meaning ‘one state of being’ and ‘Ku’ meaning ‘God.’ It encompasses all opposites in the universe and unites them as one: male and female, dark and light, yin and yang, conscious and unconscious, internal and external—the list goes on. Some believe that the Hunab Ku acts as a bridge to connect these opposites.

There are five principle meanings assigned to Hunab Ku:

Hunab Ku : One giver of movement and measure.

Hunab Ku is the unity that coordinates totality.

Hunab Ku is moved by one number alone, the power of zero—the great void of infinite potentiality that permeates all reality and makes all things possible.

Hunab Ku is the animating essence of the Fifth Force, the transcendent unified field organizer of universal timespace.

Hunab Ku means “The call to the One by the messengers who seek the highest frequency of the 18 dimensional universe.”

(Hu means calling to Allah, the name of the One; Nab(i) means prophet or messenger of the One; Ku = Highest frequency in this world dimension, the 72nd energy frequency of the 18th dimension 0.0. Hunab Ku

The Hunab Ku 21 is now presented as the quintessence of all of the teachings of the synchronic order, inclusive of the supreme system of telepathic communication, the 441 Cube Matrix upon which its structure is based.

The structure of the Hunab Ku 21 is the root of galactic culture and the next dimension of consciousness.

A Prayer by Brother Dr. Jose Arguelles ( Valum Votan-Muhammad) ….
Let us say the prayer again: ‘O Hunab Ku, Allah, One Maker, Our Creator, we submit to You. Continue to keep us whole, continue to broadcast the noosphere through us, continue to let us listen to the higher collective voice that we are so that tomorrow we may register another kin, another NET minute in the glorious journey of Timeship Earth toward its goal of universal unification in your One Unending Thought, O Hunab Ku, do not forget us, now, and do not let us forget you! Thank you for the closing of the cycle! May what we have learned stay with us and become the inheritance of our children for seven times seven generations to come, and may you bring us another cycle for all our descendants to live in continuing peace and harmony!'”

Mother Tynetta Muhammad : In the Mayan Sacred Ceremony one turns to the four directions on the compass and includes the direction of the heaven or sky and earth while calling upon the One Supreme God, they identify with the name Kukulcan or Hunab-Ku, the Bringer of Time and Measurement from the beginning of time.

When we call Hunab Ku, as prophets of galactic culture, we are calling for the manifestation of the 72nd energy frequency of the 18th universe dimension to manifest.

As the highest frequency of the entire universe world system, when Ku is invoked at this particular moment in cosmic time, the power of Hunab Ku 21 arises and the universal order is made anew.

Praise Be To Allah!