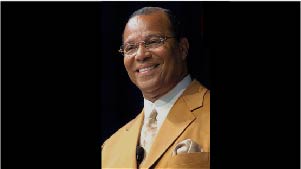 [Editor’s note: The following text is taken from a message by Minister Louis Farrakhan to inmates at Cook County Jail in Chicago on October 16, 1997, the Holy Day of Atonement]

MY DEAR FAMILY, I want to talk to you this morning from the heart. I imagine that each of you has been given an identification number, and that number says to the city or to those who have incarcerated you, who you will be as long as you are in this institution. When you leave this institution there will be a rap sheet that will follow you throughout your life to be a constant reminder to you of some offense that you may or may not have committed, but have been charged and found guilty of and are serving time for.

The question that I pose to you on this Holy Day of Atonement is, does that number or that rap sheet really define you? And the answer is, that number or that rap sheet could never define who you are. However, in the Book of Genesis Allah (God) describes who we are, and until we accept Allah’s (God’s) definition of who we are and then strive to be who we are, we will always have to live by numbers and names and titles that really do not do us justice in describing who we are.

I’m sure that many of you who never knew what the jail experience was, the minute you got here you knew you needed to get out of here. And you probably said that if you knew what this was like you never would have done what you did. But that’s done now, so let’s deal with how you can get out and never come back. Our National Prison Minister Abdullah Muhammad got out and he comes back today as a minister, but nobody is reminding him of his number or his rap sheet. You can beat the rap sheet and you can destroy the number forever, but the weight of this rests on each of your shoulders. And you can’t destroy it with emotional outbursts. You can only destroy it with the acquisition of knowledge.

Genesis indicates the birth or the beginning of something, and nobody has a beginning in captivity. When you were in the womb of your mother, you were a part of her history. Only when the umbilical cord was cut and you came out from the womb of your mother, did time start for yourself. Allah (God) is saying through Moses that, you have no Genesis in captivity. You must come out of captivity, out of bondage, to have a true beginning.

Captivity is usually a place of gestation, a place of growth and development. The womb of the female is where each one of us came from, and her womb was like a house of bondage. But it was also a house of growth and development that, when that umbilical cord was cut because it was time for us to come forward, we never looked back. When Jesus told Nicodemus, you’ve got to be born again, Nicodemus asked, how can I, a fully grown man, enter back into my mother’s womb for the second time? The principle I’m showing you is, you had to do time in a place of confinement, but, that place of confinement became a place of growth and development where that which confines you, could not justifiably hold you any longer. Your mother may have wanted to go to a party that night, but when it was time for you to come forth, she had to lay down and give you up.

You are locked down now, and your place of confinement has to be a place of gestation, growth and development for you. If you will grow and develop and let time serve you rather than you serve time, then, at a certain, the jail can’t hold you any longer. You may think that they have given you 15 years or even a life sentence, but you will not do th ind of time. Your chain will be broken the moment you reach a level of development where this place cannot hold you justifiably any longer, but the growth and development has to be a part of what goes on while you are here.

Do you know why you are here? Society wants to manage human beings rather than free human beings to be what God created them to be. In the real world they cut off the best and the brightest of the people—Black, Brown, Red, Yellow and White. The best and the brightest are either on drugs, locked down, or in an insane asylum because they were the ones with the highest intelligence and they could not be controlled.

Prison is full of the best lawyers. Prison is full of those who could have become the best doctors, the best judges, the best of everything. This world’s rulers warehouse you so you won’t give them any trouble. So you have leaders out there that are not your equal. You have managed religious teachers who preach the Gospel in a watered-down way so that politicians can rule the status-quo in a business as usual way. You have so-called intellectuals that will buck a little and then stop when they reach the glass ceiling because they don’t want to make waves. Everything is designed to manage you so you will never disturb the rich and the powerful as they rule Black, Brown, Red, Yellow and White.

Prison is big business. Prison is on Wall Street, and Wall Street is betting that if they invest in prisons, that the prisons are going to be filled. Filled with who? Filled with you—Black, Brown and poor White men. Then they tie you to business and create a ÒThree StrikesÓ law where you’re in for life, and they’ve got a modern slave working for nothing for 20 and 30 years. This is the way the rich and the powerful have planned it, but Allah (God) has another plan.

Heaven and earth have to be connected. The sun regulates the affairs of the planet. You and I come up out of a planet that is 7,926 miles in diameter; 24,896 miles in circumference; with a weight of six sextillion tons. It is floating in space, moving at a speed of 1,037 1/3 miles per hour making a complete revolution on its axis every 23 hours, 56 minutes, and 46 seconds. We can depend on the Earth because the affairs of the Earth are regulated from heaven.

What you have here is imposed order: get into your cell. It’s eleven o’clock, turn the lights out. When you don’t accept heaven’s order, then hell has to give orders because order must be maintained. That’s why some of you are under lock down or in solitary confinement because you broke the rules of order. But if you were under heaven’s order, then hell could never give you an order. When you allow heaven to give your life motion and order, then you could never be in a place like this.

When I look at you, brother, I’m looking at Allah (God). When I look at you, sister, I’m looking at the female side of the Allah (God) who created heaven and earth. Man and woman are the greatest of God’s creation, so what are you doing locked down as great as you are? It is really a sin and a shame, but not on you. The sin and the shame is on those who manage society who have never educated you to be who Allah (God) created you to be. Those who guard you and those of you who are guarded, none of you have reached what Allah (God) intended for you to reach.

The only reason that you are in here is because you rationalized wrong doing. You used the deceptive intelligence that is styled in the scripture as a serpent and it made evil fair seeming. Therefore, the first and the greatest crime that any of us have ever committed is to set up an associate god with Allah (God). I’m asking you, my brothers and sisters, whether you are White, Hispanic or Black, male or female, if you are created in the image of Allah (God), then you ought to demand more of yourself from this day forward to become reflections of the image in whom you are created.

If you determine today that you will reconnect to your Creator and begin to develop yourself, then this Day of Atonement means that you are sorry for whatever you’ve done to ill-effect others and that hurts yourself. It means that you want to turn away from that kind of behavior and you want to be the man and the woman that god created you to be.

In this atonement that you have to serve time here, don’t be enemies to each other. The way you start is to turn the inside of jail into paradise. It starts by you as an individual coming back toAllah (God) and treating your brother just like you were looking at Allah (God).