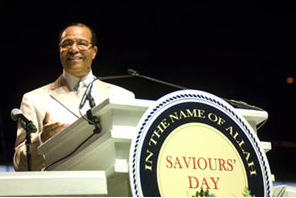 [Editor’s note: The following text is taken from a message delivered by Minister Louis Farrakhan via videotape to
a conference of Muslim Scholars held Dec. 21-23 in Jakarta, Indonesia.  The conference was co-hosted by former
Indonesian President Abdurrahman Wahid and Min. Farrakhan, who was unable to attend due to health concerns.]

I am a student of the Most Honorable Elijah Muhammad. And I could never thank Allah (God) enough for His intervention in our affairs in America by raising up from among us one to lead, teach and guide us into that process that would make us that which by nature we are. And that is Muslims, in complete submission and obedience to the Will of Allah (God). I greet you, my dear Brothers and Sisters, with the greeting words of peace, As-Salaam Alaikum.

First, let me say how grateful I am for this privilege of talking to you, and I want to thank you for accepting the invitation from (Indonesian) President Wahid and myself to attend this most meaningful conference at a time when Islam is on trial throughout the world. There is a verse in the Qur’an that reads, “You are the best nation raised among men, for you enjoin good and you forbid evil. You believe in Allah.” Prophet Muhammad (Peace Be Upon Him) wanted us to be one nation of many races, ethnic groups, tribes, families, but one nation united under the One God Allah and united under the Guidance of the Qur’an and His sunnah that we may be examples of peace, justice, mercy, and strength to the world that we as Muslims would enjoin good and forbid evil.

There is a scripture in the Bible that corresponds to this Qur’anic scripture. It reads: “Ye are the salt of the Earth, but if the salt has lost its savory power, it is good for nothing but to be trodden under foot.” Prophet Muhammad (PBUH) said three generations after him would no longer be of him. Our world of Islam, whether we wish to agree or not, is not what Prophet Muhammad (PBUH) envisioned it to be. There would be no need for Prophet Muhammad (PBUH) to tell us that the Mahdi would come out of his family if we had stayed on the Straight Path of Allah (God).

There is an argument in the Qur’an [between] Allah (God) and Iblis (Shaitan/Satan). Iblis is telling Allah (God) that, I will certainly lie in wait for them in Thy straight path, then, I shall certainly come upon them from before them and from behind them, and, from their right and from their left; and Thou wilt not find most of them thankful.” And Allah (God) answered Iblis, saying, “Get out of it, despised, driven away. Whoever of them will follow thee, I will certainly fill hell with you all.” In another place, Allah (God) says to Iblis, “You will get all except my purified ones.” The use of the past participle “purified” tells us that only Allah (God) Himself would act in purifying His people that we might become what He wanted us to be. You are the best nation raised among men, for you enjoin good and you forbid evil, for you believe in Allah (God).

Where are we today in enjoining good and forbidding evil? Unfortunately, our divisions, our enmity, our envy and jealousy of one another has brought us to a position where we are trodden under foot of many of the nations of the world. Now, many of us are trying to get back to the path of the Prophet, but we’re doing it in such an extreme way that the Prophet’s Way is made to seem oppressive and tyrannical. Allah (God) says in the Qur’an that He desires ease for the Believer, not hardship. Surely, it is going to take the presence of the Mahdi to guide us back to the Straight Path of Allah (God) that we may become that Nation with power to enjoin good and to forbid evil. It is written in the Qur’an: “Whenever an unrighteous person brings you news, look carefully into it lest you harm a people in ignorance, then be sorry for what you did.” Any accusation that is made against a Muslim leader or nation, we must demand the proof before we join a coalition that will bring war, death and destruction to a fellow Muslim nation. Allah (God) will not be pleased with us if we join in the destruction of each other.

We know that many have deviated from the Path of Allah (God), and He says in the Qur’an that, among the leaders, they would put the Qur’an behind their backs. As a result of this, many of today’s Muslim Heads of State and Governments do not lead from the basis of the Qur’an, though they say they are Muslims and, indeed in their hearts, they may very well be. But, they are using the philosophies and ideologies of the world to lead and guide their nations into modernity, or to make a modern representation of what they think is Islam.

Islam is the natural religion of the human being, and it evolves with us. We do not have to look at another book to make our nations modern. All that we need is a better and more fitting and proper understanding of the book that Allah (God) has placed into our hands through Prophet Muhammad (PBUH) that was to guide us through the Judgment of the world. We are witnessing now the destruction of Muslim nations, and, unfortunately, I believe it is the desire of the President of the United States and those with him to take this war against terrorism to Iraq, Iran, Syria, the Sudan, Libya, North Korea, Cuba, Somalia, Yemen, and the Philippines. I have said to President Bush that there is no Muslim leader that can call for Jihad, or Holy War. That was to be done by the Khalifah, but the Khilaafah, or as some call it, the Caliphat, has been destroyed by our own corruption and the machinations of the Europeans. They never wanted the Khilaafah, because the Khilaafah, properly administered, would give us the power of unity that would enable us to enjoin good and forbid evil in the world. However, now all of our nations have national agendas and we have become more nationalistic than we are in the universal spirit of the teachings of Prophet Muhammad (PBUH).

So, my dear and beloved Brothers and Sisters, I believe that we must attempt to find the path of unity and hold fast to that handle that will never break off from us unless we break off from it. It is demanded of us by Allah (God) that we settle our differences internally and that we show the world a united front. I do believe that if you, the scholars, the imams, would go back home, not necessarily to attack the governments in which you live, particularly Muslim governments, but to do what the Prophet suggested. “Call to the Way of your Lord with justice, with goodly exhortation, and in good voice and in the best manner.” We have to use a different approach, because if we go after coming to the Pure Path of Allah (God) and His Prophet in a way that angers the governments in which we live, then they will persecute us. They will use their police and their armed forces against us and call us “terrorists.”

And so, my beloved Brothers, I pray that, in this conference, we will come out of this with a united voice. We say in our prayers, “My prayer, my sacrifice, my life, and my death, are all for Allah, the Lord of the Worlds.” How will we use our lives? Will we strap bombs on our bodies, and use our bodies to kill people who may be innocent? Is this the way to bring about change? I believe that if one billion six hundred to eight hundred million Muslims in the fastest growing religion on our planet would come into some form of operational, strategic unity, we could forbid evil and we could enjoin good.

May Allah (God), the All Wise, True God, bless each of you participating in this conference. May you be inspired by the scholarship of those who present their scholarship to the Brothers and Sisters of the world of Islam in this great time of trouble and testing. And may you go away from this conference filled with the desire that we come back to the Pure Straight Path of Allah (God) and that we are patient with those who we believe have deviated. As it took the Prophet twenty-three years to bring us degree-by-degree to the path of Islam, maybe it will take patience and time to bring those who have deviated from the path of Allah (God) gradually back to that path. We must continue that effort in the Way of Allah (God) and surely, in this hour, we will be able to save nations from being destroyed by their inordinate and improper use of power coming from the West.

May Allah Bless each and every one of you as I greet you in peace, As-Salaam Alaikum.