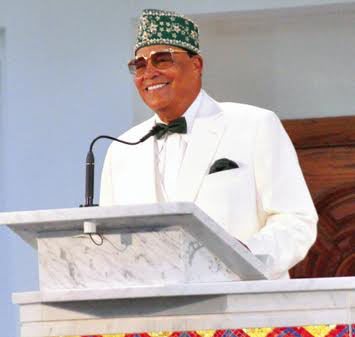 [Editor’s note: The following article contains excerpts from the Honorable Minister Louis Farrakhan’s address of the same name delivered at the San Diego Convention Center in San Diego, California on Sunday, May 27, 2012.]

“Guidance in a Time of Trouble”… No one can deny that we are now living in a great Time of Trouble. I’d like to just parse the subject for a moment; and then unpack it.

Guidance: What is “guidance”? How necessary is it for us to be “rightly guided”? And you can’t have good guidance without a “guide”; and one of The Attributes of The Great Mahdi that the Islamic world has been expecting is that He is a self-guided human being, from Whom He gives Guidance to solve the problems of our time.

Time: The word “Time” tells us that there is a term, or a period, where certain actions are going to take place, and certain guidance has to be given in that time period to those who would seek guidance.

If this is a “Time of Trouble,” then we want to be able to get through it successfully! I don’t care how beautiful a building is, when you hear a fire alarm, and it’s real and you smell smoke, no matter how comfortable you are in your seat, you want to find out “Where is the exit?” “How can I get out?” and if the doors are sufficient, “Which door should I go to?” because when a panic comes, many people lose their lives just in the panic of trying to get out.

Trouble: Well, I guess we all know what “Trouble” is … We don’t necessarily have to define that, because most of us are in some kind of “trouble”: Financial trouble; losing our homes through foreclosure because of scams by banks …

“Losing our health”: Most of us have some pill that we are taking; that if we looked in your purse or your car, you probably take your pills with you wherever you go. Now that’s a sad condition! That if you are smoking, and you know it’s bad for you, but you don’t have the will and the strength to say “no” to a cigarette, so somebody has developed a pill to help you quit. “High blood pressure,” “heart problems,” “HIV/AIDS,” “cancer of every kind,” “stroke”: The people are suffering undue stress, because we’re in a Time of Trouble, but we can’t see how we can fix it!

And poor President Barack Obama: He’s trying to “fix” the unfixable. Oh, it’s a great political season; but when you’re running for an office you can say anything, because you don’t know much about the reality of the office that you seek. That is real.

President Obama, when he was running for the office, said many things; promised many things, because he thought that if he won, he would really be “the power” to produce what he said! Only to be elected after being selected, taking an Oath of Office on a Bible; and then sitting down in a seat and getting “electric shocks”—because he didn’t know that he was really not “the power” of the seat, but there’s other powers that manipulate presidents, kings and rulers! So what you think you’ve got in the person you voted for: When you find out what you hoped for is something you can’t get—because the man you voted for doesn’t have the power to deliver, whether it is Obama today, or Mitt Romney tomorrow—your hopes will be dashed.

In a “Time of Trouble” you can’t hope in a president to get you out. President Obama has a Congress of Republicans and Democrats who are divided under his presidency. But when the Prime Minister of Israel, Binyamin Netanyahu, can come to America and get more unity between Democrats and Republicans than the president himself, you think about that! Your members of Congress are afraid to speak out against the warmongering of Israel. And with control of your members of congress through their AIPACs: Multi-national corporations run the show!

So what happened to “democracy” that you are trying to get it all over the world, and are losing it at home?

This “time of trouble” foretold of in scripture

Guidance in a Time of Trouble… What kind of “Trouble”? In order to know what kind of trouble, we must look at the “Time.” I’d like us to start with the Bible, The Old Testament, in the Book of Ecclesiastics (Chapter 3, verses 1-8) wherein the preacher Ecclesiastics states:

There is a time for every purpose under the heaven. So what Time is it? The Book of Daniel, Chapter 12, verse 1 teaches that there “will be a time of trouble like there never was since there was a time and a nation”; and in that Time, Michael, The Archangel, will stand for his people.

Well, if we have entered that “time of trouble,” the like of which there has never been since there was a time and the nation, then what “Time of Trouble” are we looking at? Let’s look at the 103rd Surah (Chapter) of the Holy Qur’an, which is titled Al-’Asr (“The Time”): “In The Name of Allah, The Beneficent, The Merciful. By the time! — Surely man is in loss, Except those who believe and do good, and exhort one another to Truth, and exhort one another to patience.” “Time” is bringing loss to humanity—time is doing that!

But there’s an exception: “Except those who believe and do good…” “Believe” in what?? Well, you may say, “I’m a believer!” Sure you are; you believe in what you believe! But that’s not what the Qur’an is talking about. The Qur’an is speaking of a period of time where certain things are going to happen, when God’s Decree will be sent down; and either you believe in that Decree, and act accordingly; or you rebel against that.

And so when The Decree is sent down, it will split families apart; it will split churches apart, mosques apart, synagogues apart and nations apart, for that is a Great Time. Jesus said: “Two will be lying in the bed”—you can’t get no closer than that—“and He will take one, and leave one.”

Now just think about who you’re lying in bed with; think about how comfortable it is, “the warmth of two in a bed.” Regardless of how you got there, or what your reason is being there, you’re there! And then something is said by God to the bed partners; then one will say, “I believe, and I’m gonna get up out of this bed and do good!” and the other partner says: “I don’t believe that!” Then what happens? Each one will go their way; and one will lose, and the other will gain.

See, what makes this a “Time of Great Trouble” is that we’re living in The Time of The Judgment of this present world and its Order.

“Are you sure that we’re living in that Time, Farrakhan?” If you doubt that we are living in that Time, well, open your eyes—but get up out that bed, first; stop snorting for a minute, or drinking! Get out from under the influence of that which does not keep you sober and open your eyes beyond the funk of the radio and television, and look around you and see what’s going on in our world!

Look at the trouble “The Family of Christ” is in: We can’t even come together to change the horrible reality outside the church door! So the church is a “place of comfort” now, where you just go to pray about the troubles in life. But when church is over, you go right back to the same condition! Look at the drugs on each corner; look at the madness that’s going on right outside church, mosque and synagogue door: If we have religion, and “our religion” is the “religion of Jesus Christ,” and Muhammad, and the prophets, then why are we so weak to change reality when Jesus changed reality? Muhammad changed the reality of his time? But we are weak to change the reality of what’s right outside our door?

What is “the reality?” You don’t have what you think you have; you are really powerless because Satan is running amuck. Guidance in a Time of Trouble…

When you look at the weather, and you see tornadoes; you see storms, you see drought… You see wind like we’ve never seen it; cold like we’ve haven’t seen it; heat like we haven’t seen it… Food dying in the fields because the heat is burning them up; the cattle dying, looking up at the sun, gritting their teeth, because there’s nothing to feed the cattle. Soon, famine is going to be in the land—you can take it or leave it. There will be no Wendy’s for you; there will be no more McDonald’s for you: They won’t have anything to give you but the garbage that they’ve been giving you—and less of it! “Surely man is in loss…”

America is building toward war, now, with Iran. Did you know, Israel has never signed the Non-Proliferation Treaty? America has, and Iran has. Did you know that Israel will not allow people to go into Demona, Israel to find out how many weapons of mass destruction that Israel has? She has a strong nerve to say to Iran: “We don’t want you to develop atomic energy for electricity so you wouldn’t be dependent on oil.” And now they “moved the goal post”: It used to be they didn’t want Iran to have a “nuclear weapon”; now, thanks Joe Lieberman and his crowd, they are saying that: “Iran must not even have the capability of producing a nuclear weapon.”

And now, the “drum beaters” for war against Iran are beating their drums. “Beating the drums” for what? And who is gonna fight the war?

Mothers, you raise your children, but you can’t get a decent education for them—nor justice! Remember the BART police slaying of Oscar Grant in Oakland, California in 2009: This young Black man was shot in the back while he was laying on the ground, handcuffed. And I know you’re expecting justice for Trayvon Martin, but you can see how they’re “chipping away” at that right now…

How long can you take this? How long are you going to wait, in each generation, to talk to your children about America as “the land of hope”—for you? How can you live in a country where you don’t have justice? Now the police are being emboldened in certain cities where they’re just shooting us down.

Well, “Guidance in a Time of Trouble” is to tell you that if you don’t make a right decision today, then we’re going to suffer even greater loss.