Those critics of the Honorable Minister Louis Farrakhan, who are motivated by the spirit of Satan, are putting themselves in a terrible position with Allah. They are being shown up as people who wish to make and/or keep Black people as slaves, whom Allah is in the process of freeing.

There were reporters at our Saviours’ Day Convention, who afterwards reported what they did about Minister Farrakhan’s lecture, from preconceived ideas that they and/or their editors had already planned. They had already begun to plant in the media what they wanted people to think about the Minister’s motives and words before he made the lecture. 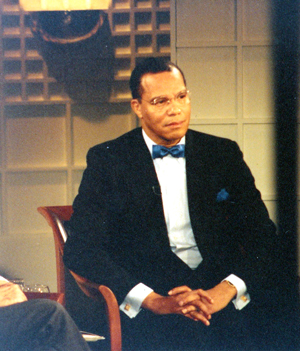 They concocted lies and half-truths. They put this deadly brew in a language form that seemed plausible. They tied their poison to the legitimate desires of many Muslims—many of whom they know are new to what Minister Farrakhan teaches; the history and the rightness of his mission. These writers and editors are carrying out the desires of persons who are wiser and more powerful than they are.

What is their real and ultimate objective? Specifically, it is the ruin and murder of Minister Farrakhan and the destruction of what he represents, as well as his followers. Such people are operating according to the planning of very wicked persons as part of a vast conspiracy that has been in force for a long time. Regardless to how this sounds, this is easy to prove.

Any of us who backbites, or in any way slanders another, has taken a step towards the destruction of that other, who then becomes a victim.

In the first verse of Surah 104 of the Holy Qur’an Allah says: “Woe to every slanderer, defamer.” What is “woe?” It is deep distress or misery, as from grief; wretchedness. Woe is intense, often a state of prolonged wretchedness or misery. This is what Allah has stored up for those who refuse to stop the evil use of their mouths and writing instruments against His servant(s).

Look in footnotes #6266 and 6267 of the Yusuf Ali translation of the Holy Qur’an of this same Surah. “Three vices are here condemned in the strongest terms: (1) scandal-mongering, talking or suggesting evil of men or women by word or innuendo, or behaviour, or mimicry, or sarcasm, or insult; (2) detracting from their character behind their backs, even if the things suggested are true, where the motive is evil; (3) piling up wealth, not for use and service to those who need it, but in miserly hoards, as if such hoards can prolong the miser’s life or give him immortality: miserliness is itself a kind of scandal.”

We ought to use our dictionaries and look up each word that tells us of the various forms of the wicked use of our mouths and pens, which the Almighty has declared war against and is now in the process of  “Hutama: that which smashes or breaks to pieces: an apt description of the three anti-social vices condemned. For scandal-mongering and backbiting make any sort of cohesion or mutual confidence impossible; and the miser’s hoards block up the channels of economic services and charity, and the circulation of good-will among men.”

So you may call yourself “Black-minded.” But if you are a slanderer, you are yet an agent of Satan. You cannot deny that slander works against love and unity, without which Black people cannot ever rise from slavery and death. Let us keep this in mind and never forget it: Minister Farrakhan has said that his teacher taught him that if we repeat a slander three times we become a part of it. At that point we are in the greatest need of Allah to help us get out of that kind of mess. We can get so deep in the grip of this evil that we cannot get ourselves out of it without help that is greater than its grip. In connection with the words of God against slander in all forms, is this headline over an article in the March 19, 2000 of The Philadelphia Inquirer.

It reads: “Farrakhan exhorts student leaders to fight oppression.” It was written by Ms. Sudarsan Raghavan, with help from Annette John-Hall who, according to the bottom of the article, contributed to this article.

They (and their editors) opened with: “In an energetic and sometimes racially charged address yesterday, Nation of Islam leader Louis Farrakhan urged young black leaders gathered at Lincoln University to challenge the status quo and ‘out-think’ any whites who deprive them of opportunities.”

Nowhere in this article did these writers back up or show that his lecture was “racially charged.” I heard the entire leture. There is nothing Minister Farrakhan said that justified such mischaracterization of his words. So these writers deliberately misrepresented him to their readers who were not able to know better.

The next paragraph reads that Minister Farrakhan stated: “If you are a student or thinker, a critical thinker, and an analytical thinker, then you can out-think your former masters,’ Farrakhan told a predominantly black audience of about 500 at the Chester County campus.”

The fact is that there were between 3,200 to 3,500 persons in attendance to hear Minister Farrakhan teach. They continued: “Farrakhan’s remarks stood in contrast to those he made last month in Chicago, where he embraced a mainstream view of Islam that called for universal brotherhood among races.”

What did he say in this lecture that contradicted what he said last month? They never name it. Why not? Because he said nothing that contradicted what he said “in Chicago.” The article also contains the usual lies about statements that Minister Farrakhan has never made about Jews and others. This is another instance of the continuation of the technique known as “The Big Lie.”

In deliberately misrepresenting Minister Farrakhan’s clear words, even to lying about the numbers in attendance, these writers of The Philadelphia Inquirer revealed that they (and their backers) continue the will of our former slavemasters, who during physical slavery did all they could to prevent us from using our minds for our benefit.

It is traditional in America for the power establishment to work against any one who tries to uplift Black people. It was the desire of our former slavemasters that the power of their Black slaves to think constructively for themselves be forever destroyed. They did everything that they could think of to eliminate the very root of the power of our enslaved ancestors to reason for themselves; to form rational judgments for their benefit and for their descendants; us.

One of the greatest proofs of the above, that even on a subconscious level, America is unwilling to grant her ex-slaves real justice is her current efforts in the repealing of affirmative actions programs throughout this land. Dr. Martin Luther King, Jr. admitted that such programs were, in effect, the very least form of reparations to us for the evils America did to us.

I have much more to write on this subject that involves the Honorable Elijah Muhammad placing Minister Farrakhan in his position that you can read of in the scriptures.