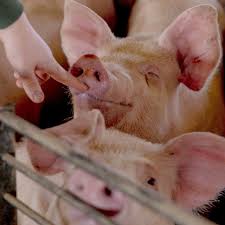 The Prophet Moses 4,000 years ago, taught the members of the White race not to eat or touch its carcass. In Deuteronomy 14, verse 8, it mentions this Divinely Forbidden flesh (the hog) in these words: “… of the flesh shall you not eat, nor touch their dead carcass.” Ever since the White or Caucasian Race or people have been on our planet numbering one to eleven of the Original or Aboriginal Nation, he has sought to reduce our numbers through very wicked and diabolical schemes which have already ravished and reduced our population worldwide through war and aggression, bloodshed, violence, disease and mischief-making beyond our wildest imagination. Now, today with his end in sight, the medical profession, combined with the pharmaceutical industry in high tech laboratories, are working night and day in producing deadly and poisonous drugs and vaccines to threaten all of us with death and destruction.

This is operating behind the scenes in these new viruses or airborne influenza which are invading the space all around us. The atmosphere that we breathe daily is polluted. The food and the water is contaminated. The ground in which our food is being produced is saturated with chemicals that are bringing about the depopulation of masses of people throughout the world who are being given these foods and the water saturated with poison. The father of the White race, named Yacub, saw the initial stages of what he was about to produce at the age of six while playing with two pieces of steel, the one with magnetic in it attracting the piece that did not have this magnetic attraction in it. This is the law in physics, unalike attracts and alike repels, which Yacub used in his future work in making a people to rule his own original nation. Thus, the power of attraction that would be exerted upon the original people had magnetic power in it and became the essence of the White man’s fiery nature or temperament in opposing divine law and the rule of God.

After he was made or grafted from the brown germ of the Original Man, he was made weak and wicked and was no longer original. He was furthermore taught an abundance of tricks to master and rule over the Original Nation, attracting them under his power of being unlike the original people to force his rule for a 6,000 year period. Two thousand of those years were lost in the caves and hillsides of Europe where he became a savage, crawling around like the beasts in the caves, having no guidance or Divine Light of civilization until the coming of Moses. He taught them the first rudiments of civilization-how to stand upright and build a home for himself and how to cook their meals with fire instead of eating their meat raw. The Jews were the first to emerge from this state and condition of savagery following Moses and have still (mostly Orthodox Jews) remained faithful to Moses’ teachings and dietary instruction, and are very close to the Muslims’ dietary laws and principles of living. The main food that was forbidden to them as well as to the Christians and other members of the White race was the prohibition against eating and touching the carcass of the hog which they have broken and ignored. Thus kosher food is good for us and the Honorable Elijah Muhammad ordered his meat from the kosher markets in Chicago’s Hyde Park area, and ordered kosher meat when he came to Mexico in 1974.

Only by following the Divine Law can we find favor with Allah. The hog we are taught was not made for human consumption. It was grafted from a cat, a rat and a dog. The hog was made by our scientists to help shortly after the White race was run across the Arabian Desert to the hillsides of Europe to help clean up their environment and is a filthy animal and extremely poisonous. It was made, teaches the Honorable Elijah Muhammad, as a medicine to kill the poisons in our body. In Book II of “How to Eat to Live,” the Honorable Elijah Muhammad writes that the hog is a medicine and not food. “Medical scientists and our own doctors are fast learning, since I have been writing this article on HOW TO EAT TO LIVE and are now cooperating with me and agreeing with me that the hog is a poison that we should not eat, though they may be eating it themselves. But, they have to knowledge the truth. Some of them are intelligent enough now, for the last few years, to start getting away from eating it. Who wants to eat the combination of these fleshes: cat, rat, and dog? This is what the hog is made of-the dog, cat and rat and the Bible teaches you that he is from a mouse. Read Isaiah 66:17, ‘They that sanctify themselves and purify themselves in the garden behind one tree in the midst, eating swine’s flesh, and the abomination, and the mouse, shall be consumed together, saith the Lord.'”

Prior to the publication of books I and II of “How to Eat to Live” by the Honorable Elijah Muhammad in the 1960s, in 1956 and 1957, he published some of his first writings on the subject of the hog (pig) in his two volumes entitled, “The Supreme Wisdom.” Quoting from Volume II we read in Chapter 11 under the title: “The Forbidden Food,” the following words: Medical Science on Hog-“The Hog is called Khanzier in the Arabic language, which means: I see (Khan) and very foul (zier). This animal is indeed so foul, ugly and filthy that it is known to the medical profession that eating it decreases the mental power. There is a small opening on the inside of his front leg out of which flows a mass of corruption. The medical science says of this: ‘The opening is an outlet of a sewer.'” (See Monitor of Health, by Dr. J.H. Kellogg, M.D., pages 117-124.)

This current epidemic of the H1N1 Influenza is just one of the experimental biological weapons that are being released by the scientists of the White race to depopulate our numbers. Why Mexico City? It is one, if not the largest populated cities in the world of a mixed Indigenous population. These new viruses being unleashed is not an accident. Be aware of the evil intention of our open enemies in destroying our Original People all over the planet earth. We have begun in this year 2009 the start of the last four years to the New World Order as prophesied in the Mayan Calendar to the year 2012-2013. Our open enemy knowing this, desires to destroy as many of us as he can to prevent us from living an enduring happiness in the life of the hereafter. We will continue this reporting in the next article. We thank the Honorable Elijah Muhammad for his enlightened life-saving teachings from Master Wallace Fard Muhammad, (God in Person).