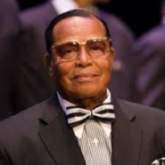 [Editor’s note: The following text is excerpted from a speech delivered December 10, 1997 by Minister Farrakhan in Baghdad, Iraq, as part of his World Friendship Tour to 50 nations. This article originally appeared in Vol. 17, No. 9.]

America is leading the world today in a campaign against terrorism. Terrorism is described as acts of violence that take the lives of innocent men, women and children for political purposes. Those who engage in acts of terrorism do so because they see no redress for their grievances in the halls of justice that have been set up to give justice to those who are aggrieved.

All acts of violence for political purposes against the innocent must cease. If the Muslim world unites, then our voice will be heard and there will be no need for any Muslim individual or group to engage in such activity. If we become the voice of all who are deprived of justice, they will have no need to engage in the killing of innocent people to achieve political ends. Our unity on the basis of the Holy Qur’an is the end of all acts of terror.

In this regard, sanctions are a weapon of mass destruction and should be viewed by the nations as the greatest form of terrorism, for sanctions kill the innocent to achieve a political end. Since the conclusion of the Gulf War, 1.4 million lives have been lost in Iraq. If you take that total of lives lost as a percentage against the total Iraqi population and compare that loss, percentage-wise, to the population of America, if similar sanctions were imposed on America, her losses would total 18 million people. How can we remain silent in the face of this slaughter?

What nation has suffered more than 10 times as many losses after the war was over than during the war? Would any Muslim like to be charged by God with being an accomplice to murder because we remain silent in the face of this slaughter? Allah says in the Qur’an: “Persecution is worse than slaughter.” Therefore, all civilized nations must reject terrorism, in all its forms, as evil, and the Muslim nations must forbid what is evil and guide to what is best!

Therefore, we are asking the representatives of the Organization of Islamic Conference (OIC) to call on United Nations Secretary General Kofi Annan to urge the lifting of UN sanctions on Iraq, Libya, and the Sudan, and to call on Britain and the United States to lift sanctions against Iran, Nigeria, Cuba and North Korea.

The OIC must demand of the Secretary General of the United Nations that the two Libyan nationals charged with the bombing of Pan Am Flight 103 over Lockerbie, Scotland, be tried in a neutral country, that their guilt or innocence may be ascertained. The families of the victims deserve closure to this, and certainly the Libyan people should not suffer if there has been no proof in a court of law that her citizens are guilty of such an act. Sanctions should be lifted from Libya because innocent people should not suffer these acts of terror for political purposes.

I call on the world, from this Cradle of Civilization, to cry out against this reign of terror. Member nations of the OIC should contribute to build a center in Mecca that features an “Institute for the Resolution of Conflict” among Muslim states and organizations, that never again should Muslims shed the blood of Muslims.

As America and the West are entering the Christmas season, where the celebration of Jesus Christ as the Prince of Peace is heralded, the theme at Christmas is “Peace on Earth, good will toward men.” As we, the Muslims, are entering the Holy Month of Ramadan, where we sacrifice things that are natural—food, water and sex—during the daylight hours, to attain closeness to God, what better season to appeal to the nations for peace?

The American people stood against the killing of children in Vietnam by United States forces. Some even sang in the streets of America: “Hey, Hey, LBJ, LBJ, how many Vietnamese children have you killed today?”

In closing, let me say to the Muslims, from the Qur’an: “And hold fast by the covenant of Allah, all together, and be not disunited. And remember Allah’s favor to you when you were enemies, then He united your hearts, so, by His favor you became brethren. And you were on the brink of a pit of fire, and He saved you from it. Thus, Allah makes clear to you His Message that you may be guided.”

To the American people, I know that some in my country will say: “Farrakhan is a traitor, and we should try him for treason for giving aid and comfort to our enemies.” However, if Mother Teresa or Lady Diana came to Baghdad and went to the Saddam Hussein Hospital for Children, and cradled a baby dying for the lack of medicine due to sanctions, you would call her a saint. But, because I am a descendant of slaves, because I am a Muslim, and because I appear to be defiant, some will say that I should be dealt with harshly.

Sometimes, the most patriotic citizens are those who love their country enough to stand against the will of their leaders, if they believe the will of their leaders is wrong. A Canadian woman stood up against the destruction and maiming of innocent life by land mines. A few days ago, 125 nations signed a treaty against the use of such weapons. As a citizen of the United States, I have a duty to America, but my first duty is to God. I have a duty to all humanity, whether they are Muslims or not. As it is written in the Qur’an as a command for me and for all Muslims: “Keep your duty to Allah as it ought to be kept, and die not unless you are Muslim.”

The new century can be a century of peace. May Allah (God) grant the President of the United States the desire to please God. May Allah grant the people of Iraq and all those who suffer under sanctions to remain steadfast in faith, and remember that, after difficulty comes ease. May Allah grant us the ability to remove the scales from the eyes of the spiritual leaders of the world, that we will give direction to the Caesars of the world, that we may render unto Caesar what is Caesar’s, and render unto God what is God’s.

Whatever is your decision, I will come home to face it; but I say, with all humility, God and the nations are watching how you act.