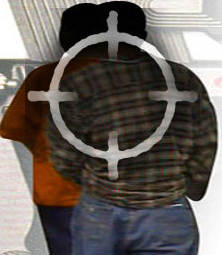 Brothers, how did you become a “gang?”

[Editor’s Note: The following text is reprinted from Volume 17, No. 30, May 26, 1998. On June 25, 1989, Minister Louis Farrakhan delivered a message titled “Black Youth Marked for Death,” to nearly 1200 youth, many members and leaders of so-called gangs. This is the second part of that lecture.]

The Holy Qur’an teaches us that we are social beings. So there comes a time in your development, at age 8, 9, 10, when you leave the home and go out into the street to meet your friends in the neighborhood, and you form a natural alliance.

There is a time in our lives that we identify with, get our feeling of worth from, and seek recognition by, a group of boys and girls who have similar interests, aspirations or needs, and usually they come from the same neighborhood in which we are growing up.

Our reason for being together is defined by streets or neighborhoods and, therefore, we feel we have a need to protect or defend what we call our “turf.” As a result, out of the need to identify and belong to and be recognized by a group of peers to feel safe and secure, groups are formed and natural leaders emerge to whom the members of the neighborhood group or gang give their allegiance.

Each one of you that have a neighborhood group that is called a gang, you have given your allegiance to one of your own. You call him your “Leader.”

What qualities does the leader have? He usually possesses extraordinary gifts; courage, bravery, the strength to dominate, the Will to win, the Will to survive. Oftentimes, the leader is the greatest fighter among you. Sometimes, the leader whips you, so that when he beats you physically, you submit to him, you become his “boys,” his group.

In White neighborhoods, they harness this courage, bravery and will to win, this aggressive tendency in young people. It’s not a fault. It’s a natural tendency in young men to be aggressive, to show strength. It is our rite of passage to maturity. We are growing up now. I am as strong as you, so I test my muscle against your muscle, my strength against your strength. I’ll put my hands up and shoot out a few jabs to see if you know how to defend yourself. This is a part of growing up.

We don’t have a YMCA in most inner city neighborhoods, so we have no way to direct the energy that is in us; but among White people they see the same energy and they form a Little League—a baseball team, a football team, a basketball team, a boxing team. And all of the hostility and aggression is worked out in team sports. The will to win makes you a winner in baseball, in basketball. The courage is seen in how you work with the team, your bravery, your desire to be a winner.

In White communities and the more affluent Black communities, they do this to guide the “macho” spirit in young men. But suppose you don’t have any money? There is no Police Athletic League that cares about you. There is no little league team for you. Then what happens to this aggressive tendency in the young man? It degenerates. Consequently, our leadership, gained through courage, bravery and strength, is gained not in games, but in conflict.

“You came on my turf, man.” I hit you in the mouth for being in the wrong place at the wrong time, and this is the way I prove to myself I have it; this is the way I keep my “boys” in line. So, since you get leadership by that means, the only way leadership is maintained is by constantly proving yourself by constant involvement in conflict. Therefore, our recognition can only be maintained and sustained by exploits that cause us to be recognized: how many members of a rival gang have we beaten, maimed, killed? And the more we beat, maim and kill one another, the more we have to beat, maim and kill. So it becomes an ever-spiraling cycle.

There are White people at the top who know that this is a natural evolution in human beings. It’s not just germane to poor people; this is natural to all human beings, particularly males. But they sit in boardrooms and say, “How can we manipulate this?”

Now look at our communities today. What is the result of this “gang” conflict? It is the destruction of our own people simply because they do not live in the same neighborhood, go to the same school or wear the same colors.

They don’t wear the same symbols; they don’t wear their hat in the same way. If I wear it one way, I am this; if I turn it around another way, I am that. We start killing ourselves over something silly, over the marks that we have in our hair. Everybody in this gang has three marks on the side; everybody in that gang has four marks in the back. And we knock each other down because our hair is cut differently.

You don’t see the big picture. You don’t realize that we all come up out of the same earth and are fellow sufferers in an unjust society that has put us in that sick role. We are the same people, with the same experience, originating from the same source. We come from the Lord of the Worlds, Almighty God, Allah, yet, we see each other as strangers.

Have you ever thought that perhaps somebody wants this to happen?

We are one people, not tribes. And because you live in a different area, on a different turf, you don’t see yourself as the same people. You feel you have to protect what you really, in fact, do not even own. Then, to complicate the situation, drugs are brought in. It is no longer a matter of where you live, it’s “Don’t you sell any drugs in the turf that we have carved out.”

And oftentimes police recruit our young people to sell drugs. I said, oftentimes some police recruit our young people to sell drugs. Why do we sell drugs? It is because we want to kill our people? No! It is because that is the way the enemy has opened up for us to make the kind of money that would allow us to wear good shoes, designer jeans, designer sneakers, gold chains, gold watches, diamond rings. You can’t wear that working for minimum wage all day long.

Who wants to work all day long for nothing? So when someone comes along and says, “Look here, man, sell this white powder. Give this rock of crack to your brother. You can make some money,” the money attracts you. You are not thinking about death to your people. You are thinking about those big bucks, and if you can make $500, $700, $1,000 per week selling drugs, then who can interest you in a 9 to 5 job working for $4.25 an hour?

So you just look for an excuse to use your Uzi, to use your AK-47, your Street Sweeper and your Magnum. But you kill more innocent people, destroy more property, because you don’t know how to shoot!

Now your neighborhood is getting rough, and your poor mother at home is wondering if you will make it from the school to the house. She is saying, “Lord, I’ve got to move! I’ve got to get my baby out of this!” Where are you moving to, Mother?

The Robert Taylor Homes, Stateway Gardens, Henry Horner Projects, White people want this turf. When they plan downtown redevelopment, they recognize you are too close to the downtown area, the business section of the country! The White people have moved to the suburbs, and it requires gas, money and time to get to downtown Chicago, New York, Boston, Los Angeles or Detroit.

So they plan your removal. How? Create gangs. Feed weapons to the gangs, and make them kill each other; just confine the killing to the Black neighborhood, don’t let it spill over to the White neighborhood. Then, as they kill each other, it will produce “Black flight.” They prepare apartment houses for you in the suburbs, so you move out and the enemy lets the property go down. The banks are in collusion with this. They send some of you to burn the property. Then, as you begin to move out, Whites let the property keep going down. Then, the White developers move in. Imagine the Robert Taylor Homes as a condominium!

They don’t want you there anymore! They want you OUT.

White flight from the cities to the suburbs has left Blacks, Hispanics and poor people in control of the inner cities. But in developing the inner cities, the areas in which most Black people live are the areas most convenient to downtown and the seat of power. So real estate developers want to put condominiums where houses exist now and sell them to Whites who are far removed from the centers of power.

They did this in Washington, D.C. They caused us to kill each other. And when we left, the Whites came in and took over where we once lived, and they made it beautiful! And now we can’t get back in there! They did it here, in the Woodlawn area. They allowed the Blackstone Rangers to come up. They gave us guns and we started killing each other. Our parents left. Now the White people have come and taken back over that area. You are gone now, and you can’t get back! They are going to do this in Stateway Gardens; they are going to do this in the Robert Taylor projects; they are going to keep death and destruction going in the Black community until you run and get out of the city and you will NEVER, EVER, HAVE A BLACK MAYOR AGAIN AS LONG AS TIME PREVAILS.

These efforts by the wickedly wise are designed to create a National Emergency to justify in the public’s mind the use of brutal force to put down this threat to public safety from what is called “gang activity.”