More and more religious scholars all over the planet are coming to agreement that we are living at “the end of time.”

How do you see this situation? So many people—millions or billions—have Bible and Holy Qur’an and they are taught by them by others who say they have more knowledge. Some agree and others don’t.

For example, if you live in the USA you can listen to Christian Ministers teach the Bible—White, Blacks and others, every Sunday. That involves other areas of the world and other professors/scholars. 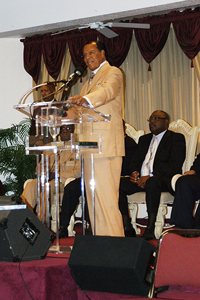 Do the events in the state of California, and in the city of San Diego, revolve around the mission of the Honorable Minister Louis Farrakhan at this time? YES.

These series of events affected me and production of my articles leading up to the three days right before we left Phoenix and went to California, in the city of San Diego. I will go much deeper into that later.

You may think or say you know what happened in San Diego, but do you really know? Why California and at this time? Why just before the 4th of July?

Many of us go to movies, or watch on TV, or read many books and talk to each other, and watch others’ events—like the weather—that cause people to think about or ask what is going on around the world.

Is this that time?

At the end of my previous article, I wrote: “Now, toward the end of Minister Farrakhan’s sermon, he said these words:

“Why, Allah are you making me talk like this? It’s because what I’m saying is not just for you in this room, but for others who will hear this word, because we are all suffering from this hypocrisy. And it’s poisoning our communication with one another. We got to be washed clean.

“We got to be washed clean.”

Earlier, in his sermon, Minister Farrakhan spoke these words:

“We’re crying out for jobs today, but we were fully employed in those days. Now they have no more use for us and that puts us in a dangerous position when you are no longer useful to your former captors and you unfortunately not being useful to yourself.

“So now there’s a move afoot to make us a self-destructive people. That instead of the former slave masters killing us, we’re busy killing ourselves and killing one another.

“And we have our beautiful Mexican family here. This once was theirs. So you can’t say to them they are aliens (illegal). That’s a horrible word to use for former owners. So maybe we should tell them who the real aliens are, but we won’t be insulting. We will not do that.

“But we want to take insult away from the original owners of this part of North America. Indian, Mexican people who the Honorable Elijah Muhammad taught us that he was taught by the Great Mahdi that over 16,000 years ago came from Asia across the Bering Straits into what you now called Canada and then they moved East and South and went all the way down into what you now call Central America, Mexico, South America.

“That’s many tribes, but there’s really one great nation of people that now must be reunited with themselves.

“So it’s their time now, as well as ours, that God would intervene in our affairs and bring the bottom rail to the top, that the last would be made first and the tail would be made the head.

“God wants to use the hearts of Black people who have suffered, and our Native families, that have suffered as well, but yet has that sweet heart, that no matter what was done to us, we do not desire to do unto others as they did to us.

“That’s the kind of heart that God would use, as the cornerstone as a universal government of peace. That all human beings regardless of creed or class or color would be able to live under that government in peace and enjoy justice, equality and real freedom.

“That’s where we are today. And that’s why I’m so grateful for God’s intervention giving us the Honorable Elijah Muhammad, a man that many of us may have heard of, but never understood.

“So I’m honored, I’m happy to be in San Diego and to greet all of you with the greeting words of peace.

“The original scriptures, in Hebrew and Arabic; Shalom, Shalom Alaikum and in Arabic; As-Salaam Alaikum.

“Can you think of a better greeting than that? Then the next question would be, how do we obtain that kind of peace that we can offer peace to each other?”

Allah willing, I will continue his words and my comments at that time. Now, I think we all should get, from The Final Call,Minister Farrakhan’s words in this little booklet titled: GUIDANCE to America and the World in a Time of Trouble.

The table of contents:

The Honorable Minister Louis Farrakhan responds to the September 11, 2001 attacks on America;

Two letters of warning by the Honorable Minister Louis Farrakhan to President George W. Bush prior to the start of the war in Iraq.

The Consequences of War and the Fruit of Peace:

An excerpt from a Holy Day of Atonement message delivered by the Honorable Minister Louis Farrakhan on October 16, 2002, the seventh anniversary of this historic Million Man March.

More next issue, Allah willing—why San Diego, at this time?