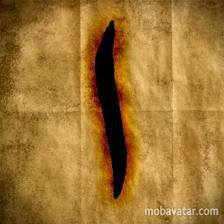 Why we should never abbreviate the names of Master Fard Muhammad, Master Elijah Muhammad and the Honorable Minister Louis Farrakhan.

I would like to share an interesting experience that further explains to the believing community of Muslims why we should never shorten the name of anyone let alone Divine Men when mentioning them in any conversation or quoting them before the people.

I was sitting 1 day in an apartment off Essington rd in Joliet, Il. As I was in meditation or coming out of it…..A BLACK SCREEN WAS “LITERALLY” PROJECTED BEFORE MY EYES. Imagine someone out of the air placing a 4-foot by 4-foot screen before your person leaving not a single sign of how it got there. I thought I was seeing things. I knew that this couldn’t be possible (at least I thought so, smiling) as I franticly looked around to gain my composure I focused on the screen that lay right before my eyes. As I focused I noticed the Arabic Symbol Alif (I knew of the Symbol because of my Studies of the three Mystical Letters of the Holy Quran called Alif, Laam, Mim I believe it is)…..

And as they brought this symbol closer to my eyes I saw energy emanating outwardly from this symbol or letter…..

as I recognized the Arabic letter, the screen snatched back (as if it was sucked into a cosmic vacuum of extreme power).

Immediately after the experience ended.. I reflected on the Message that I knew Allahs angels were given me and they were saying that all symbols and letters have and project life energy. You can take something as simple as your finger and draw a symbol in midair, and you can effect a change in the place of your abode or travels…..They were telling me that when a Person studies the word of God that there is a hidden potent Vibration that is emanated from every letter or nuisance of God’s word if the people understood. When we spell out the names of the servants of God that same potency, vibration, and effect are naturally emitted into the eyes and being of the person that reads the name subjecting them to a subtle change unbeknown to them, and with the constant reading, saying, and meditating of Gods words and names they can elevate there own vibrational frequency into oneness with God through constant study, reading and meditation upon his creations and words……..These are some of the secrets of God’s gifts if the people would just understand….
closing
So if the true believer truly desires the best for the people of God, the best for the creation and has the highest respect for those names that he renders to the most beloved of his creation then WE would never take away from that which God has rendered as a gift to the person and humanity.