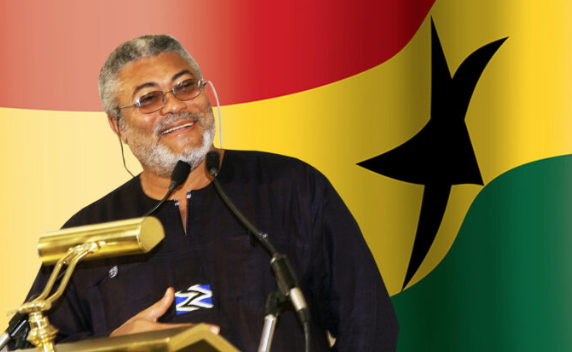 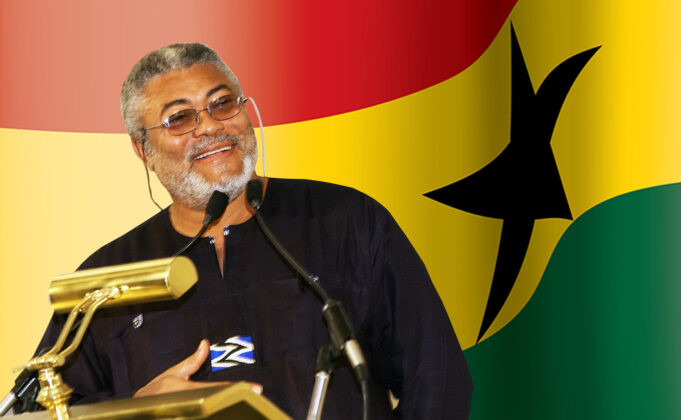 To Nana Rawlings, the Rawlings family, the loyal followers of President Rawlings and the people of Ghana. It is a great honor to pay our respects to the memory of a great noble brother who has returned to Allah (God) and joined the ranks of the ancestors.

After visiting the islands of the Caribbean and the nations in Central America we decided we would come back to the United States and begin to plan, our journey to Africa and the rest of the world in 1986.

Our planned trip would begin in Nigeria, then Ghana, and include other African nations, Saudi Arabia, Pakistan, China, and possibly Iran. When we embarked on this journey, the first stop was to go through London, England where I was considered persona non grata. I could come through England, but I was never permitted to stay.

When we landed in England, at Heathrow Airport, I was arrested as I got off the plane. There was a 14-hour wait for the connecting flight to Nigeria. Some of those traveling with me were permitted to enter London. But I was offered to go to a local prison for those 14 hours or be quarantined in a part airport until my plane was ready to leave. I chose the latter.

My son, Mustapha, stayed with me and for 14 hours we pondered the next step of our journey.

When the time came for my flight, we were allowed to join the rest of the team. My passport, along with a letter from the British authorities to the authorities in Nigeria were held and given to the pilot. My wife and I and others got on the plane.

The plane took off. After it reached the height of about 32,000 or 36,000 feet and was on autopilot, the door to cockpit opened and two beautiful Black men came out. One was the pilot. He handed me my passport and told me of the letter. The letter described me as a troublemaker and that letter was kept by the pilot. He looked at me and said, “Brother Farrakhan welcome. We are honored to have you and your entourage on this flight. I went to see you at Madison Square Garden and with great pride, we welcome you to Nigeria.” For the rest of that trip, we were at peace.

When we landed in Lagos, if that letter had been given to the Nigerian authorities, I might have been arrested again in Nigeria. We did not know, and we later found out that the U.S. embassies in Africa had been given information by the U.S. government concerning me. That I was masquerading as a Muslim and that I was a communist coming to Nigeria to increase problems between Muslims and Christians and that I was not a real Muslim.

When I landed in Nigeria I spoke at the masjid, the national mosque, as a guest. I had planned to speak at the National Theater, which we had rented, and give a lecture to ease the tension between Muslims and Christians in Nigeria. Nigeria had just entered the Organization of Islamic Conference, and it had upset Christians in Nigeria. But since we had so much success in America speaking to our Christian family, speaking in Christian churches, being with our Christian brothers and sisters, especially after standing with Reverend Jesse Jackson in his noble effort to win the position as representative of the Democratic Party in the 1984 presidential election, I felt I could help by speaking to Nigerians, Muslim and Christian.

We paid thousands of dollars to rent the National Theater in Lagos, hundreds of dollars went to the local newspapers, students from Lagos University, and the people of Nigeria were excited. The night before my lecture, the leader of the police of Lagos came to my suite and demanded money. We had already paid for everything, so he threatened us that we would not speak if we did not give him money. I did not yield to such a demand. But on the next day, when Brother Khallid Abdul Muhammad and other members of the staff were going to prepare the National Theater for our arrival, they were met by members of the armed forces, who told them there would be no meeting. They threatened to shoot Brother Khallid, if he made any movement toward the National Theater. On that day, the Nigerian people came out to hear the Minister and they were teargassed by the army. So, I never left my hotel and members of the student body of Lagos University, and others came to the hotel where they knew I was staying. It was under those conditions that I met Brother Ahmed Rufai and Brother Ahmed Tijani and our friendship began. But I did not wish to stay in Nigeria any longer.

We made the next stop on our journey in Accra, Ghana, where I was met by Dr. Francis Abdallah Botchway, the Ghanaian minister of culture. The misinformation of the American government was also disseminated to Ghanaian authorities, saying the same things they told the Nigerian government—that we were not Muslims and that we had come to stir up trouble.

Unknown to us, President Rawlings asked that Muslim leaders, the Muslim scholars, the Muslim qadis (Islamic judges of law) be invited to the Kwame Nkrumah National Center where I would speak. I spoke to over 500 Muslims who came from different parts of Ghana. When I finished my lecture, the Muslim leaders came and kissed my head, put their heads to my shoulder and welcomed me to Ghana. The Muslim leaders accepted me and bowed to me in a way that I had never received in America. Unknown to me, President Rawlings permitted me to enter the country though he had heard from his intelligence sources the same thing that was heard by the authorities in Nigeria.

I spoke at the university in Ghana, not knowing that the president was listening to all my talks and he sent his people to talk to us about security because the propaganda was still heavy against us. He saw we had no weapons. President Rawlings offered us weapons. I had a meeting with all those that came with me and we learned of the offer of the president to arm us so we could protect ourselves as we moved around in Ghana. The overwhelming response to his noble gesture to us was “Thank you, Mr. President, we bear no arms in America and the same God that protects us in America will protect us in   Africa.”

President Rawlings allowed me to address the Armed Forces of Ghana. While I was addressing them, he came into the auditorium and I stopped my lecture because the Head of State had come in. He came to the rostrum and said, “Brother, no. You continue to speak until you have finished.” He sat down. When I finished, he sat me in his seat on that stage and went before the people and said, “When my intelligence told me ‘A,’ I did ‘Z.’  I went the total opposite of what my intelligence was telling me about this man, because if I had listened to them, I would never have let him in the country much less, give him an opportunity to speak. But after letting him speak, I heard a noble messenger of truth and a noble son of Africa.” He opened the whole country to me and a loving cooperative friendship began at that moment with us, President Rawlings, the Ghanaian government and people. This is the Jerry John Rawlings that we honor, a noble man, a man of extremely great character, a man who would never say behind your back, what he could say to your face. This is the man we honor today. This is the man we declare today to be an Eternal Friend to the struggle of our people who now joins the ancestors to inspire unborn generations from beyond.

Long live the memory of President, Jerry John Rawlins. Long live, his wife and children, and the spirit of his great love for Ghana, for Africa, for Black people in the Diaspora. Our families are forever joined. He was a great pilot and he took my son Mustapha in one of these great jets. He flew my son up into the sun and down and around. When they landed, my son was in the jacket of a Ghanaian pilot and the head gear. Even while he was in flight, President Rawlings told Mustapha to take the controls and allowed him to fly the plane a little and then they landed.

He loved my wife and family, and we loved him and his wife and family. Brother Abdul Akbar Muhammad became our representative to Ghana and we had no one better than Min. Akbar Muhammad, who has been accepted by Ghana and is now a citizen of Ghana as well as the citizen of the United States. We both are citizens in many countries throughout Africa because of our Noble Work on behalf of the Honorable Elijah Muhammad, and the Nation of Islam.

Shortly after the Million Man March, and its great success, we decided to visit Africa to join the global struggle of our people for freedom and justice, carrying into practice the principles of the Million Man March of Atonement, Reconciliation and Responsibility. Our desire was to link our struggle with the struggle of our people in Africa, the Middle East and throughout the world under these great principles.

But because President Rawlings stood up strongly like a Black man should God stood with him and President Clinton did come to Ghana in March 1998. If we would not be so cowardly and would resist the devil, as the scripture teaches us, he will flee from us. And they fled from President Jerry John Rawlings, and Mr. Clinton came.

Ghana’s reputation in the world soared under his great leadership. Kwame Nkrumah, Ghana’s first president educated at Lincoln University, an historically Black college in Pennsylvania, was President Rawlings’ mentor. While others, after President Nkrumah who was deposed in a coup arranged by America, abandoned Mr. Nkrumah, President Rawlings stood boldly for Kwame Nkrumah. I laid a wreath on the grave of Mr. Nkrumah in his birthplace, in Nkroful, Ghana, and participated in libations at his grave site. They also built a monument and mausoleum to President Nkrumah in Accra, Ghana and I with my family, my International Representative Akbar Muhammad and President Jerry John Rawlings laid a wreath at the memorial. Later I laid a wreath at the grave of my great brother, W.E.B. DuBois, at a center that the Americans in Ghana built.

We shall never forget this man and the love that he had in his heart for Africa, for justice, for truth. Long live the memory of our great brother, long live Ghana, and African liberation.

Thank you so much for reading the few words. On behalf of my wife, Mother Khadijah Farrakhan, my daughters Maria, Betsy Jean, Donna, Fatima, Khallada and sons Louis, Jr., Joshua Mustapha and Abnar, all of us join in sending our love, and our condolences, and we mourn with family of President Rawlings. We mourn with the people of Ghana, our beloved brother, friend companion in struggle, President Jerry John Rawlings.